Under a Dark Sky by Lori Rader- Day 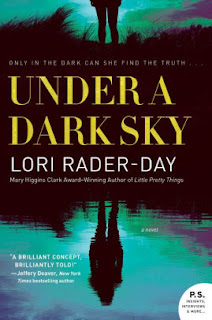 Darn that Lori Rader-Day. I am not a night person, but once I started Under a Dark Sky, I had to stay up and finish it. It's the story of a troubled woman, caught up in an Agatha Christie nightmare. And, it's just right.

Eden Wallace's husband, Bix, a war hero, has been dead for nine months when she uses his reservation at Straits Point International Dark Sky Park in Michigan. She's hated the dark for years, but, after Bix's death, she's terrified. The stay at the park may send her screaming back to Chicago, or help her find solutions to her fears. But, Eden's reservation at the park isn't what she anticipated, a few nights all to herself in a guest house. Instead, she's just one of seven guests in the house. Yes, she has the suite to herself, but her fellow guests are three couples in their mid-twenties. Five of them went to college together, and it's an anniversary that reunites them.

When one of Eden's fellow guests is murdered in the middle of the night, the police consider all of them suspects. Eden's a stranger, so all the young people view her with suspicion. As she sees it, she's the only one with no motive. Now, she has two mysteries on  her hands. The most immediate mystery is which of the other guests is a killer?

Eden's other mystery is one that has troubled her for nine months. Although she claims Bix made the reservations at the park as an anniversary present, he knew she didn't like the dark and had little interest in the stars. Why is she here? And, what's the truth behind her marriage? She isn't even sure they would have made it to ten years with Bix' PTSD, and other issues. As she observes the relationships between her fellow guests, Eden recalls stories and incidents that help her identify her own feelings towards her late husband, the past, and the future.

As in The Day I Died, Rader-Day introduces an intriguing protagonist with a complicated past. She slowly reveals Eden's story to the reader, through conversations and memories. While there's a locked-room mystery, and Eden is "mixed up in some Agatha Christie shit", as her sister says, Eden herself is the most fascinating part of the story. She's an awkward, haunted woman, trying to find the courage to live with herself.

Rader-Day's skilled use of darkness is so subtle it's only afterwards that the reader notices it.  Eden moves from the darkness of her own soul-draining despair, its isolation, to a murder scene under the beauty found in a dark sky park. There are degrees of darkness in this novel.

Under a Dark Sky is another intense, compelling mystery from an author who excels in placing unconventional characters in dramatic, disturbing situations. To say it's a page-turner is an understatement. Lori Rader-Day's latest book will keep you reading into the dark.

So, Lesa, what I'll say is 'Yes, yes, yes!!'. I'm reading this one right now and am about at the halfway point. If I didn't have a prior lunch commitment and a bunch of other things to do - well, I would be sitting and reading until the end. My thoughts won't be posted until in September, but I totally agree with what you said. Such an intriguing setting and character. Lori needs to write much faster. Ha!

I'm so glad you agree, Kay! And, thank you for the vote of confidence that I wouldn't write spoilers in the review. There was so much I wanted to say, and couldn't!

Yes, what's it hurt, Sandy, to give it 50 pages? Not every book is for every reader.

This sounds like such a gripping read! Will search for it.

I have been reading a lot about this book and wanting to read it, and your review just cinched it. I couldn't put The Day I Died down and this sounds like more of the same. Yay. And thanks for no spoilers. I really appreciate reviews where I just learn that the reviewer liked the book and what made it a good read, not a recap that inevitably leads to some little hint I don't want.

Wow, great review! You make all that darkness too intriguing to miss.

Thanks, everyone! And, Grandma Cootie? I had a book totally spoiled for me by a reviewer who told me EVERYTHING. Why bother to read the book then? I try hard not to spoil the book for anyone.

Wow is good to be back with my ex again, thank you Dr Ekpen for the help, I just want to let you know that is reading this post in case you are having issues with your lover and is leading to divorce and you don’t want the divorce, Dr Ekpen is the answer to your problem. Or you are already divorce and you still want him/her contact Dr Ekpen the spell caster now on (ekpentemple@gmail.com) or whatsapp him on +2347050270218 and you will be clad you did