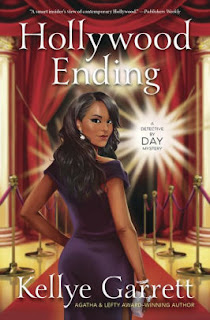 I think I'm getting a little tired of the escapades of Stephanie Plum-like characters. Although Kellye Garrett's second Detective By Day mystery,Hollywood Ending, is set in Hollywood, apprentice private eye Dayna Anderson and her best friend, Sienna, are a little too Stephanie and Lulu for me.


After solving a hit-and-run case, former commercial spokesperson Dayna Anderson wants to become an apprentice in training to cop turned private investigator Aubrey Adams-Parker. She thinks she’s found the perfect case when Lyla Davis, spokesperson for the upcoming Silver Sphere Awards event, is killed at an ATM. Dayna’s boyfriend, hot actor Omari Grant, had been at that ATM just minutes earlier. Dayna teams up with her best friend, Sienna Hayes, a reality star wannabe, and uses her wiles and connections to probe the social media secrets of Hollywood’s biggest stars. Some people have secrets worth killing for, and Lyla Davis seems to have known them all. Dayna’s soon caught up in Hollywood gossip, while trying to push Aubrey to become licensed as a PI so she can continue her own adventures. Dayna’s schemes are sidetracked when she realizes she’s picked the wrong person as a killer. In Hollywood, what’s one more false story?

In Hollywood, everyone has an angle. Sienna always wears red, and even hires a paparazzi to follow her around and take pictures. It's all about publicity, gossip blogging, who's dating who. And, so much of the world is pretend. All the deception makes it hard for Dayna to get an angle on the killer. Then, there's the mysterious Z who keeps showing up "to help" as Dayna's investigating.

Fans of Janet Evanovich’s Stephanie Plum will feel right at home with the outrageous mistakes and sexy men. Garrett spent eight years working in Hollywood, including writing for Cold Case. The author’s insider knowledge of Hollywood adds to the humor. Maybe I'm just not interested in clothes and shoes and makeup and Hollywood celebrities. I'm the wrong audience for Hollywood Homicide.

*****
FTC Full Disclosure - I received Hollywood Homicide to review for a journal.

I had the same problem with the first book, but with everyone saying how great the first book was, I was beginning to doubt myself. I almost picked this one up and, from your review, it doesn't look like much has changed.

I’m not the audience for this either. I’m not a big fan of either Stephanie Plum or books that spend time discussing shoes and clothing.

I never read the first book, David. And, although I know others raved about them, I can only write what I think, and it just didn't impress me that much.

I liked the early Stephanie Plum, Sandy, and then they all began to feel the same. And, I'm definitely not the audience for books that dwell on celebrities, shoes and clothing.

I know what you mean about Stephanie Plum. Once you read a few of the books, that's it! They are ALL the same. She wants Morelli. No, she wants Ranger. She wants both of them but will never choose, or change. We quit reading them some time ago. Her books written with Lee Goldberg about a master con man and a beautiful FBI agent are much better overall. THE HEIST is the first.

I had trouble with the first one Hollywood Homicide. Quit after about 50 pages - I thought it was pretty dumb. I was reading it because all the reivews said it was wonderful. I think it was on the Edgar or one other list. And I quit reading about Stephanie Plum about book 12. It is the same book over and over - Gramma Mazur is the only saving grace.

Jeff, I should try The Heist. I like con men characters.

Netteanne, I don't think I missed much by not reading the first book if the second was an example. Just not for me.

for the first book I have a problem, but many say the opposite, I start to doubt myself. see from your review I became interested in this ebook

I thought it was only me, I started off really enjoying the Janet Evanovich books but they started to really annoy me. After all the years of being a bounty hunter she still has NO skills and requires one of her men to save her regularly. Even with the books co-written with Lee Goldberg they feel as if they have found a formula and wont budge from it. Hollywood Homicide feels the same and I gave up.

I'm so happy to find out that I was not the only one to not be able to get into the first book...thanks everyone!!!

Good to know we're not alone, isn't it?