Have You Heard? Victoria Laurie's A Glimpse of Evil

It's time to share another one of Sandie Herron's reviews for those of you who enjoy audiobooks. This time, it's the eighth in Victoria Laurie's Psychic Eye series, A Glimpse of Evil. Thank you, Sandie.


A Glimpse of Evil 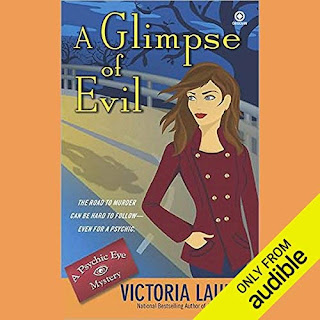 It's almost too much to believe that Abby and her FBI boyfriend Dutch would both find jobs in the same FBI office in Texas as opposed to Michigan AND be followed individually by home contractor Dave, Dutch's old best friend from the police department, while Candace preceded them there and had already bought her condo as had Bryce, Dutch and Abby's boss. They all arrived separately but coincidentally for all different reasons.

It felt a lot like old home month, but the office was a new environment for Abby. She was working with the cold case squad, and by weeks' end had reached the group's goal for the year! Abby didn't do that alone nor did she claim to. However, her boss Bryce, also Candace's boyfriend although they both were too unsteady to admit that, changed the group's methodology in that same first week.

Bryce immediately saw the value in Abby's skills. He had her prepare a lecture/lesson for the squad to show and teach her intuitive ways. No one showed up. However, they all went the following week when she taught them how to gain access to their own feelings. With the interactive fashion of "show and teach," the group was much more enthusiastic.

Candace and Abby began working a case of three missing and likely dead pre-teen girls. It became entangled in a dangerous accident, distraught friends, and an ex military man. A group back at the squad was working another case that Abby also felt was at some turning point at the same time. The excitement and anxiety ratcheted up and up.

I can only tell you that the solution caught the eye of several higher ups who want Abby to save her country. How? I think we have to read onward to find the answer.

Sandie Herron
Posted by Lesa at 4:00 AM