When the Flood Falls by J.E. Barnard 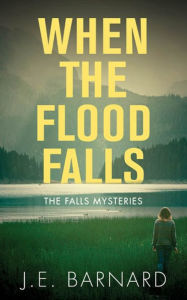 J.E. Barnard's debut novel, When the Flood Falls, introduces three troubled women who have to fight past their fears. Despite their initial distrust of each other, they find common ground in their need to find a killer.

Lacey McCrae's husband, a fellow officer in the Royal Canadian Mounted Police, was abusive. After her divorce, she left the force, and fled. She's hiding out west of Calgary at the edge of the wilderness, working security at a soon-to-be-opened Arts Centre. She's staying with her university roommate, Dee. Dee has money and power, and works with, and runs with barons and hockey stars. However, she's scared to death. She finally admits to Lacey that she hears footsteps at night, yet no one has seen a prowler. Because of Lacey's own past, she believes Dee's ex-husband is terrorizing her.

When there are incidents at the Arts Centre, and Dee is the victim in a hit-and-run accident, there doesn't seem to be a connection. Then a hockey star disappears, the driver suspected of hitting Dee. Now, Lacey and Dee are both in danger. Lacey is forced to confide in a neighbor, a woman she once suspected of drug addiction. While Dee is laid up, and Lacey no longer has the authority to question people, the three women will have to rely on each other.

Barnard's debut novel won the Unhanged Arthur Ellis Award in 2016 as Canada's best unpublished mystery. The complex, unconventional story unfolds slowly. Barnard's three women all have voices in the story. The women are all suffering from trauma in one form or another in this story that deals with secrets and the power of men to inspire fear.

While the mystery itself was twisted, I never warmed up to any of the women. However, I know some readers will appreciate the award-winning story. Lacey McCrae will probably appear again in a second Falls Mystery.

I think I'd like to try this one. I might not warm to the characters either, but it sounds like a book that would work for me. Thanks for featuring it, Lesa. I love getting your recommendations.

I actually love it, Kay, when someone says they'll try it even if it wasn't for me. Everyone has different tastes, and I hope the books reach people who appreciate them!