The Chairman's Toys by Graham Reed

Graham Reed's debut novel, The Chairman's Toys, was the winner of the notable Freddie Award for 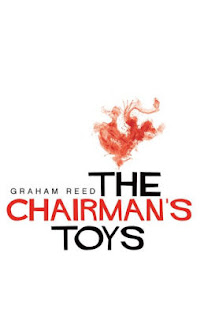 Writing Excellence from Mystery Writers of America at Florida's Sleuthfest. Set in Vancouver, this is the type of caper that will appeal to fans of Tim Dorsey. The antihero, Jake Constable, tells the story of what can go wrong when a drug dealer tries to reform.

After his grandfather died, Jake grew marijuana on his farm, and partnered with a distributor he calls "the Norwegian". Although he had to buy his way out of the partnership, Jake plans to lead a normal life. What do you call normal? He's self-employed as a house-sitter who checks on property owned by his ex-wife's wealthy real estate clients. If Jake just happens to hold a party that gets a little out-of-control at Micky Wu's mansion, the home of the Underwear King of Beijing, Jake's best friends, a gay couple, own a cleaning business. When they find a dead body in the bathroom, and the Norwegian shows up at the party, it may be too late. Micky Wu arrives before they can clean. Now, Jake has messed up some job for the Norwegian, and Micky Wu wants his money back.

Micky Wu gets his money back, but it's only the start of Jake's problems. His apartment is broken into. His friends' places are broken into. Jake's tasered by a sexy looking sales rep for a nutritional supplements company. His friends are kidnapped. His ex-wife's uncle shows up from China. He's teamed up with two agents from the Chinese government who are trying to catch Micky Wu in illegal practices in order to make the millionaire return to China. What's worse than drug dealers, kidnappers, and Chinese agents? Jake's mother has to rescue him when he tries to save his friends.

The Chairman's Toys is a fast-paced, non-stop caper featuring a cast of unconventional, offbeat characters. The black comedy is not for everyone. If you want to meet a flawed group of people caught up in the world of Vancouver crime, it might be your type of book.