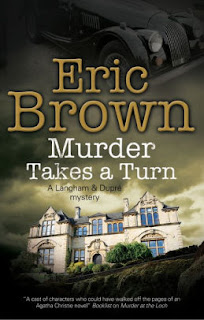 Somehow, I failed to review the fourth book in Eric Brown's Langham & Dupre mystery series. I read it, but didn't realize I never reviewed it until I picked up the fifth book, Murder Takes a Turn. There may be a few cliches in these traditional mysteries set in the 1950s, but Brown captures the atmosphere and spirit of the period and, in this one, the locked room mystery.

Charles Elder of Elder & Dupre Literary Agency in London, is so upset that his business partner, Maria Dupre, confronts him. Charles has received numerous invitations from Denbigh Connaught. Connaught wants to switch literary agencies and sign with Elder & Dupre. He also wants Charles to come to Cornwall so he can apologize for the past. Maria assures him that she and her new husband, author and part-time detective Donald Langham, will accompany him to Cornwall. Everything seems to be aligned for the visit because Donald was just hired by Connaught's daughter, Dr. Annabelle Connaught, to investigate her father's business manager.

When the trio arrives at Connaught House, they discover their host has invited several old friends. It seems he wants to apologize to a former veteran, two former lovers, and his brother, as well as Charles. But, Connaught hasn't changed. He's still dislikable, and still isolates himself in his unique studio that turns with the sun. After he meets with his "old friends" individually, he leaves some in tears, and some ready to kill him. When his business manager finds him dead, murdered, in his locked studio, Langham knows only he and Maria have no reason to want the man dead.

Brown's clever mystery will be appreciated by readers who enjoy mysteries that take place in grand houses in isolated locations. It's an enjoyable story with a cast of stock characters. But, oh, that murder device! It's ingenious, and fans of locked room mysteries will appreciate it. The next time, I'll be watching for Eric Brown's Langham & Dupre mystery.

I put this one on my library list. If I really like it I will start at the beginning of the series. Too many series, too little time.