The Patchwork Bride by Sandra Dallas 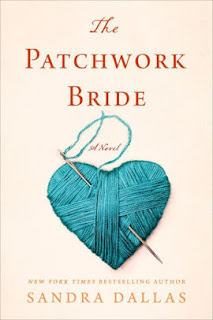 Over the course of fifteen books, Sandra Dallas has placed women's relationships and quilting at the heart of her novels. Historically, quilting was a way for women to gather and tell their stories. In The Patchwork Bride, quilting is the tool a grandmother uses to illustrate to her granddaughter that she's not alone in her fears and her reluctance to marry.

Ellen and Ben are aging ranchers in Colorado in the early 1950s. With her weak heart and Ben's growing memory loss, Ellen fears it won't be long until the couple is forced to move to town. She escapes her worries by putting the finishing touches on a wedding quilt for her favorite granddaughter. June is the only one who loves the ranch. Like her grandparents, she turns to the ranch when she's troubled. When June shows up unexpectedly, Ellen is shrewd enough to guess there are wedding issues. June has run away from her wedding. She feels pressured to marry her fiance before he's sent to Korea by the army. June isn't sure she wants to be a military wife. She had been excited about the opportunities opened by her business degree. Now, she's afraid she'll just be an appendage going from base to base.

While Ellen works on the quilt, she tells June the story of another runaway bride. In fact, Nell ran away from three different men. At the end of the 19th century, she left her grandparents in Kansas and headed to New Mexico to work for her aunt on a ranch as a hired girl. It was there she learned to love the west and a cowboy she called Buddy. Although Nell desperately wanted to marry and not become an old maid, she fled New Mexico, and then left two other men before marrying the love of her life. Ellen's account of Nell's loves and troubles forces June to examine her own feelings and issues with her fiance.

The reader will quickly identify the character of Nell, and understand the direction the story is taking. However, Dallas is still a spellbinding storyteller who keeps the reader following as closely as June does while Ellen stitches together the pieces of the past. The Patchwork Bride isn't as remarkable as a couple of Dallas' earlier novels, The Persian Pickle Club or Tallgrass. (The savvy reader will catch the one reference to the women of The Persian Pickle Club.) However, it's still an enjoyable novel of the bonds between women,; friends or relatives, and the support they provide each other.

There were a few editing issues with this book. I read the actual book, not an ARC, and found there were slips when Ellen was misidentified as June. Those errors don't surprise me in an ARC. They should have been caught in the final edition of the book.

However, it's easy to overlook a couple confusing name changes. It's not as easy to overlook the beauty of the relationship between a grandmother and her granddaughter as they exchange stories of the love in their lives.

Thanks for sharing your thoughts about this one, Lesa. I'll put it on my list for just the right time. As I said before, the two others you mentioned are big favorites of mine too.

And, really, Kay? They're my favorites of her books. This one was a good story, but it isn't as good as those two.

I just put The Persian Pickle Club on hold at the library! Thanks ...

You're welcome, Gram. I hope you love that book as much as I did. You'll have to let me know what you thought.