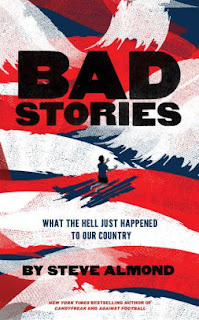 Although it sounds like fiction (and I wish it was), Steve Almond's Bad Stories is actually nonfiction. For himself, for his journalism students, and for other befuddled voters, Almond analyzes what went wrong in the last presidential election. Almond examines history, popular culture and literature as he searches for answers in  Bad Stories: What the Hell Just Happened to Our Country.

Almond uses literature and journalists of the past to say we were warned. Hunter S. Thompson wrote, "The whole framework of the presidency is getting out of hand. It's come to the point where you almost can't run unless you can cause people to salivate and whip on each other with big sticks. You almost have to be a rock star to get the kind of fever you need to survive in American politics...The main problem in any democracy is that crowd-pleasers are generally brainless swine who can go out on a stage & whup their supporters into an orgiastic frenzy - then go back to the office & sell every one of the poor bastards down the tube for a nickel apiece." Sound familiar? Thompson write that in 1972 with Nixon in mind.

There are quotes from Kurt Vonnegut, William Butler Yeats, James Baldwin, Aldous Huxley, Joseph Conrad, The Great Gatsby, Moby Dick, The Grapes of Wrath. Ray Bradbury's works are mentioned several times, as is the Old Testament. Why all the literature in a book that analyzes the political scene and an election. Almond, who teaches at the Nieman Fellowship for Journalism at Harvard, said, "I'd argued that the whole point of literature, and by extension literary journalism, is to complicate our own moral perceptions by forcing us to accept that other people matter, that their struggles and hardships matter, and that their delusions cannot be tamed until they are understood. Propaganda has the opposite aim; to simplify moral action by dismissing the humanity of others."

That final quote, along with Thompson's, really sums up the book. Almond says we've told each other bad stories, allowed newspapers and television, and then the Internet, to play on our fears by telling us stories that aren't true. Those fears, of immigrants, of people who don't look like us, of losing jobs and social status, are all bad stories that we've learned to believe. Why did so many women vote for a self-professed sexual predator? What stories did they have in their past, what fears did they have that made them accept lies about the other candidate? Almond builds a case against newspapers who are run for profit, the media, even comedy shows that professed to be critical of the right. He even points to our history, an electoral college based on history instead of a system that allows every vote to count. And, he blames Obama, reality television, the GOP. He discusses the Cold War and Putin, who "views Trump as the ultimate Russian asset".

Is this a book that's actually going to change anyone's opinion? No. It's a book, though, that will show some of us what went wrong, what we're doing wrong. It points to our fear of the different, different skin color, different races. It reminds us it will take ordinary people to change what we don't like, including the electoral college. It reminds us to consider consequences when we vote. An election is not a popularity contest.

If nothing else, Bad Stories offers a glimmer of hope. It's not even a glimmer of hope involving politics. There's a final message of hope for humanity, from, of all people, Joseph Conrad. It's a message about storytelling and delight and wonder, joy and hope and fear. This thoughtful, disturbing examination of our recent past, and how we arrived here, is worth picking up just to realize we can change our future. We need to tell different stories.

You're welcome, Gram. I'll be interested to hear your reaction some Thursday.