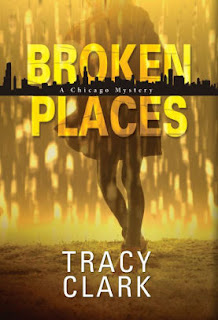 Tracy Clark's debut mystery, Broken Places, is one of the best books I've read this year. Her story of a tough African-American cop turned private investigator reminds me of one of the legendary detectives in modern mysteries, Sue Grafton's Kinsey Millhone.

Cass Raines was a Chicago cop until the day Farraday, a colleague and menace, messed up when Cass was trying to talk down a young armed suspect. Farraday's incompetence forced Cass to kill the suspect, and she was shot. Now, two years later, she's on her own as a private detective. Despite her lack of family, though, Cass is not really alone. She's cobbled together an unusual group of friends, including the priest, Father Ray Heaton, Pop, who stepped in when her own father deserted her after her mother died. But, when Pop shows up unexpectedly, saying he needs a detective, she's angry. He hadn't revealed the problems he was having. He's being followed. There's been vandalism around the rectory and church. He's worried now. And, Pop has a reason to worry. Although she was only following his wishes, Cass blames herself when Pop and a gangbanger are found shot in the church.

But, Cass couldn't be angrier when Farraday, who caught the case, thinks he can easily wrap it up with the statement that Pop must have caught the gangbanger stealing from the church, shot him, and, then, in a fit of remorse, shot himself. Cass knows better. And, if she has to call in favors, and round up friends to help, she will. Cass is the one who does the legwork and hard lifting though. She's determined to find the truth, even if Farraday thinks he already knows it. It's a case that will send her into dangerous territory in Chicago, but Cass won't let down the man she called Pop.

Broken Places is a riveting story, action-packed from the very beginning. But, it's the fascinating characters that make this book come alive, Cass and her friends.

Cass Raines appears to be a loner, but she's a loyal, trustworthy friend. Broken Places is successful in launching the detective career of this tough, gutsy woman. But, she's admirable as a character because she's also vulnerable, although she would never admit it. She has empathy for the vulnerable - a four-year-old, a homeless man, gangbangers. And, her shock and suspicion when her actual father turns up is natural for a woman who pretends to need no one. On the other hand, she's loyal to her childhood friends, whether they're ex-cons or a former troublemaker turned nun. The mystery field is all the better for the addition of Cass Raines.

What a great assortment of characters! I love that. And I'm planning on reading this one. Heard about it a little while ago and thought it might be a good one for me. Your review makes me think - Yes! Nice job, Lesa!

Thank you, Kay. I hope you enjoy it as much as I did.

Sounds like a winner and the good news is that our library system has it on order so it is now on hold.

It was a winner. I hope you enjoy it, Netteanne.