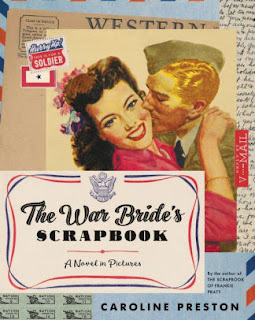 Caroline Preston, author of Jackie by Josie, takes a unique look at a World War II marriage in the fascinating "novel in pictures", The War Bride's Scrapbook. Using historic pictures and captions, clipped art and illustrations, she tells the story of a couple who met and married quickly during the war, and the follow-up when the man came home. It's a sad story, but very revealing of the times and attitudes.

Two adult women correspond after one finds a scrapbook in a suitcase in their mother's closet. They had never seen the scrapbook, and the story it reveals is not one that they had ever heard nor understood. The scrapbook is divided into four sections, "Life Before Perry - 1921-1943", "Our Romance - 1943", "Life Without Perry - 1943-1945", and "Homecoming - 1945". The scrapbook ends there. Fortunately, the daughters reveal the story's ending.

Lila Louise Jerome graduated from Sweet Briar College in Virginia, but failed to graduate with the "Mrs." her parents hoped she would achieve. She was fascinated by architecture, but women couldn't get an architecture degree in Virginia at the time. So, after graduation she worked for her father in the insurance business, and, once the U.S. entered the war, she worked for the University of Virginia running the Bond Drive office. Then, she met Perry Weld for the second time, when her roommate left. She advertised for a roommate and Perry answered. He was a sergeant, a combat engineer getting ready to go overseas. He'd graduated with a degree in architecture, so they shared an interest. Fifteen days later they were married in what was called "a furlough wedding". And, when Perry was sent for training, and then overseas, Lila Weld put together a scrapbook, a keepsake for when "a husband returns home".

What happens when a man comes home, a husband that you only knew for a month before he left? What happens when the man comes home injured, no longer the man you married? This marriage, and Lila Louise Jerome's experiences were unusual. And, her daughters questioned why Lila and Perry didn't divorce. It's a fascinating question, and Lila's future is revealed only in her obituary years after the war.

Preston's book brings the war years and this marriage to life, using all the little details of the scrapbook. It's a unique way to tell a story. And, it works so well. It's a moving book, with a powerful ending with that obituary. Preston, an archivist who has collected historic scrapbooks for years, puts them to excellent use in this unusual story.

It does sound interesting. It made me think of the Dana Andrews storyline in THE BEST YEARS OF OUR LIVES. Then again, my in-laws were married six weeks after they met in 1946, so sometimes these things do work out.

And, I'm all for those ones who worked it out. This one has an unexpected twist, though. Funny you mentioned Dana Andrews. The narrator commented repeatedly that her husband looked like Dana Andrews.

I love books told in interesting ways - texts, emails, diaries, and scrapbooks. Putting this one on my list to pick up at the library. And thanks for sharing about it!

Kay, I also just picked up her other book, The Scrapbook of Frankie Pratt. It's about a young woman in the 1920s. Looking forward to it. You're welcome!

Thanks for this one. I just put it on hold at my library. The library seems to have all of her book and I may try another later. I was very young during the time of this book so I love to learn more about it, even through fiction.

I just picked up her scrapbook about Frankie, Gram. That one is set in the 1920s. It looks like a fun one.

Interesting story; I think you have us all running to the library for this one. And also interesting is how women were not "allowed" to get certain degrees. And how their lives play out because of this.

I picked this one up at the library, too, Grandma. Your comment "And how their lives play out because of this" is very interesting when it comes to this particular book.