Shot in the Dark by Cleo Coyle 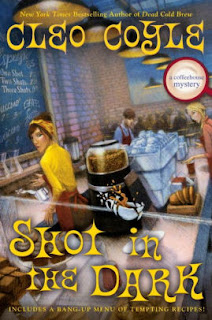 The seventeenth Coffehouse Mystery by Cleo Coyle, Shot in the Dark, was one of my favorites. It's timely, and the authors are acutely aware of the relevance of social media in our daily lives. Fortunately, Sandie Herron enjoyed the book, too, because she had already signed on to review the book. Today is release day for Shot in the Dark. Thank you, Sandie.

The Village Blend coffee shop has a new distinction – best hookup hot spot.  A new dating app has smartphone users swiping at possible dates faster than Clare Cosi and her baristas can keep the coffee flowing.  Clare’s ex-husband Matt fills them all in on the finer points of the Cinder app where Cinder-ellas meet Cinder-fellas.  Special ring tones signal when a candidate arrives in the man’s pumpkin box, and it is up to him to take the chance by swiping right or rejecting the young maiden by swiping left.  All the presenting and choosing are done quickly, making way for a new round of candidates.  Once the decision to meet occurs, much of the in-person side of dating takes place in public places, like the coffee house we all love.


One evening shots sound at The Village Blend.  While everyone ducks, Clare springs to action and climbs to the second floor lounge.  A young woman has a gun pointed at a man cowering in his seat.  She is spewing the sordid details of their Cinder love match gone terribly wrong.  Clare talks her down just as police arrive.  The publicity kicks in just as quickly as nine different videos of the event go viral, turning this hot spot into a dead spot.

Before Clare can turn her thoughts to how to recapture her audience, she meets her former mother-in-law Madame for a late dinner, saving her from abandonment from her own over-65 dating service beau.  Clare can’t avoid further trouble when she sees a dead woman floating in the Hudson River.  The floater turns out to be an executive from Cinder!

As their way of fighting back against the bad publicity, the entire Cinder staff cooks up an event to be held at The Village Blend with an audience of paid party goers to guarantee excellent attendance.  While Clare agrees to the stunt, she cooks up her own side event.  She has a picture drawn of the offending male and passed from barista to barista so they all know who to look out for.  Then she fires up her own cell phone to join Cinder and hunt him down herself.


A series of rowdy events full of mischief and mayhem follows, events not to be missed in the history of The Village Blend coffee house.  Barista Esther hosts a poetry slam in the second floor lounge that is wildly popular.  The crowd spills onto the outside sidewalk.  Thanks to Cinder’s initiative, The Village Blend is back in business.  But more occurs at this party to beat all parties than meets the eye.  One very dead body sends Clare down a new avenue of espionage, betrayal, and undercover acts that undermine several companies and individuals. A possible new suspect is found when Clare pieces together many of the new clues.

I enjoyed the build up to the big comeback party when it seemed everything took off in many directions.  Clare was determined to find who put the woman in the Hudson River and make sure he was punished.  In doing so, she becomes entangled in discovering several corporate crimes.  She takes dangerous chances to track down a killer.  Many people become involved in the treachery that is uncovered, and I admire Clare’s persistence.

I thoroughly enjoyed this 17th entry in the entertaining Coffeehouse Mysteries by Cleo Coyle (real life husband and wife team Alice Alfonsi and Marc Cerasini).  It began with an event that caught my attention and touched a note in my own life so I was invested in following along on Clare’s quest to find several criminals.  I was glued to the pages when we came to the conclusion that was complex yet well explained.  An excellent choice in reading.

Oh this one does sound fun! Thanks to Sandie for the review! I've been a bit behind on this series - not sure when I got distracted and left off. However, I'm beginning to think that I'm going to have to let go of my 'must read in order' pseudo-rule. Too many series and many I suspect could be jumped in and out of without 'harm' to the reader. I love the premise of this book and so I think I'll go ahead and read it - taking a walk on the 'wild' side. ;-)

This series is one you can jump in and out of, Kay. So, you can pick this one up without worrying about what you missed.

I read the beginning of the series as soon as a new book came out but eventually tired of the mother-in-law from Hades. Perhaps time to try again.

I have this on hold at the library. I always enjoy this series.

This is such a fun series, I came to it late so am reading from the beginning and also the new releases - makes for an interesting voyage so have many in the middle yet to read.

Liz, She's no longer the mother-in-law from Hades. Maybe you should just start with some of the more recent books.

Netteanne, That's an interesting way to read. You have the beginning, and you know where it's heading.

Thank you for the kind and generous review. I was especially thrilled to learn our story touched a note in your own life. Writing is a pretty solitary business--except for those magic moments when the author and the reader find common ground through the characters and the story. I guess what I am trying to say is that your sincere review brightened up this writer's day.

Read with joy, Lesa, and thank you again.

Adding my own thanks to Sandie Herron for the beautiful review. I had the same reaction to the review as Marc. During intense periods of writing, we talk to each other (and our cats), but we're often in our own isolated little world. When the book is finally published, I'm gratified to know that readers not only enjoyed our story, but also found something in it that touched them in a personal way.

Cheers again, Sandie, for taking the time to so thoughtfully review SHOT IN THE DARK. And thanks sincerely to Lesa for hosting. It is always an honor to see our book reviewed on Lesa's Book Critiques.

Thanks everyone! Marc and Alice, it appears that you have a number of fans here. Happy reading for everyone!