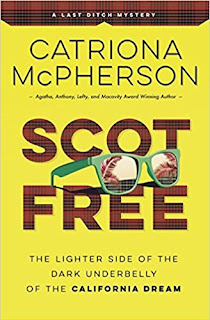 Multi-award-winning author Catriona McPherson starts her new humorous series off with a bang. Literally. Her character is hiding in a closet during fireworks in Scot Free. And, those fireworks explode in Lexy's life throughout the book.

Lexy Campbell followed her American boyfriend from Scotland to California. She married him, started a marriage counseling practice, and six months later, divorced the cheater, and is heading home. She has one last session before she leaves, with the sweet old Bombaros. But, it's the police who dig Lexy out of the closet where she's hiding on the Fourth of July. Mr. Bombaro is in the morgue. Mrs. Bombaro is in jail, under suspicion of blowing up her husband.

Lexy can't let that sweet old lady rot in jail. She cosigns for the bond, and then realizes she'll need to find the killer. Lexy's watched enough detective shows. But, she was heading back to Scotland, and now she needs a place to stay. The Last Ditch Motel is just down the street from the police station. And, the eccentric residents and owners are just the supportive friends Lexy needs in this time of crisis. It's just that there seems to be as many crises at the motel than in Mrs. Bombaro's life. Whether it's an invasion of bugs or an invasion of relatives, Lexy, with her language barrier, manages to confuse everything.

The cast of characters from the Last Ditch Motel make this mystery shine. They're larger-than-life, exaggerated, and, just wonderful. The book takes me back to the days of early Evanovich when exploding cars and the cast of characters was funny. McPherson introduces her own charming sleuth with a quirky group of friends in this new romp, Scot Free.

I think this one sounds fun. Although, I would be annoyed if we ended up with a choice between two men that went on and on and on...LOL! If you know what I mean. ;-)

I know exactly what you mean, Kay! I hope Catriona doesn't do that to us.

I've enjoyed her other books --- darker character studies, wonderful --- so am looking forward to this one. And my library has it on order, so on the "hold" list I go.

Thanks, as always, Lesa, for introducing new authors and authors new to me to a wider audience.

This one is on my library list as everywhere it is reviewed, it is praised. Thanks.

Thanks for this review. Catriona McPherson's books are always a treat to read, but you have made this one sound like a lot of fun. And maybe a good replacement for that series that was so good in the beginning and then went on and on.

I hope you all enjoy it if you read it. I wasn't around much the last couple days. I'll explain on Wednesday!