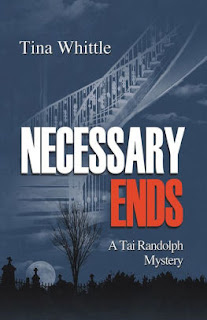 Tina Whittle's Necessary Ends is called "A Tai Randolph Mystery". And, yes, Tai is in it, and she's essential as always. But, this is the story of her lover and partner, Trey Seaver. It's also the culmination of a story arc, a point that marks a change in the direction of this series, and a change for the characters themselves.

Tai Randolph owns an inherited gunshop in Atlanta, Georgia. Trey is an ex-cop, once a SWAT sniper. Following an accident in which there was damage to his frontal lobe, Seaver now works in corporate security. Then, an old case from his police days comes back, and Trey has to reevaluate his decisions.

Private investigator Finn Hudson shows up, saying there was a possible assassination attempt against Nicolas Talbot. Talbot was a hotshot Hollywood mogul who was the primary suspect in his wife's murder. Trey still thinks Talbot did it, but the murder remains unsolved. Now Talbot thinks Trey Seaver has the best reason and ability to want him dead. But, he wants to meet with Trey before accusing him publicly. It's at that meeting that Trey's ability to act as a human lie detector comes into play. Talbot insists he didn't kill his wife, and Trey believes him. Who really killed her, and who wants Nicolas Talbot dead? It's a case that takes Trey and Tai into the ridiculous world of filming a television show, and brings them all kinds of suspects.

Necessary Ends is a suspenseful, complex mystery featuring a pair of sleuths who are an awkward fit for life, but a perfect pair together. This intense, character-driven story marks growth and change for both damaged characters, Tai and Trey. The story is filled with complications and uncertainty. It's a mystery that should appeal to fans of Karin Slaughter.

This is the sixth book in the Tai Randolph series. Do yourself a favor. Go back and read the first one, The Dangerous Edge of Things. Why shouldn't you catch up with these two fascinating characters while you wait for the seventh book to come out?

I have been meaning to try to series for quite some time. I like the sound of the characters and also enjoyed hearing the author on a panel at LCC. Plus, Poisoned Pen Press - can't really go wrong there.

Lesa, I downloaded a sample of the first book from iBooks to find out if I am interested in the series.
Thank you for the review.
Trust you will make a big dent in those 9 books you need to read.
Hugs to all 3 fur babies.

You're right, Kay. It's hard to go wrong with Poisoned Pen Press.

You're welcome, Charlotte. And, thank you for your wishes. 1 down, eight to go.

I found The Dangerous Edge of Things at my library and put it on my list. I like to start at the beginning of a series. Thanks for the heads-up.