Have You Heard? Killer Insight by Victoria Laurie

Today is my review deadline, which I will make, but that means I didn't read anything else last night. So, I'm glad Sandie Herron wrote a review of the audio book of Victoria Laurie's Killer Insight. Thank you, Sandie. 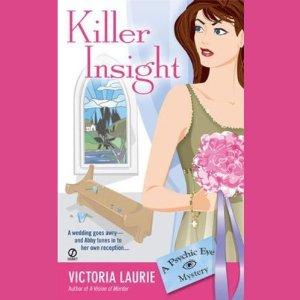 Abby Cooper, psychic intuitive, has been dating FBI agent Dutch Rivers for many months.  That they love each other is clear, and so is the fact that they are both stubborn.  They end up in a fight with many misunderstandings, and Abby takes it to mean they've broken up!
An old friend of hers is getting married, and one of her bridesmaids went missing several days ago, so she asks Abby to be her attendant.  With a desire to “get out of Dodge,” Abby agrees and hops on a plane bound for her old neighborhood in mile high Colorado.  Her visit is anything but pleasurable though.  From the moment she arrives, she joins with the group of old friends and tries to find the missing bridesmaid.  However, Abby's usually clear visions are quite foggy.  That is compounded by dealing with the high altitude, a different environment, and so many close friends, including ex-boyfriend Duffy McGinnis, now the town sheriff.  He is still handsome, charming, and seductive.  Believing she is single and unattached, Abby flirts back with Duffy.

Friends keep disappearing one by one.  They find one woman outside a shack, shot in the center of her chest three times.  There was no way she would have survived that wound.  The shooter must have either been clumsy or the victim of a set up because they find one man's wallet outside the shack by the victim, looking just like evidence. I found the audiobook so compelling.  It puts the story in your face and fills your senses so you, as the reader, are almost another character in the story who observes everything.

From the beginning of the book, Abby states that she died; that's no spoiler.  She does get to the scene of another killing just at the right time for the killer, someone she knows and is shocked to see with the gun in her hands, to shoot Abby in the chest.  Abby meets with her deceased grandmother who takes her on a tour of her life via pictures so she can know the ramifications of staying in what is perceived as Heaven, or she can know how many people she will help if she returns to Earth.

You will need to read this tense psychic thriller among friends to get the full story and see if you can figure out "whodunit" before the author reveals that fact and to find out what happens to the killer next.  Is there ever a wedding?

Each book in the Abby Cooper series is a bit better than the last, and this is no exception.  This book took "normal" thriller circumstances and tips them on their ear.  Everything is a bit off kilter, or a lot in many areas.  You will enjoy tracing the abundant clues and chasing down a murderer.  I am not the least bit worried about running out of Victoria Laurie mysteries.  Don't miss any highly recommended Abby Cooper mystery.