Hard Aground by Brendan DuBois 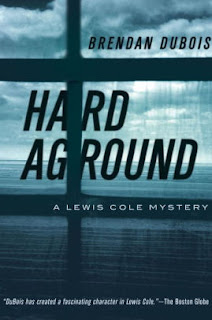 While Hard Aground is Brendan DuBois' eleventh Lewis Cole mystery, it's the first I've read. And, I wish I had read more of them about this intriguing character. While the back jacket mentions "Rear Window", I can think of a couple books that have similar characteristics. More later.

Lewis Cole is retired and writes freelance pieces for magazines. But, right now, he's laid up, recuperating from recent surgery to remove several tumors. While he waits to learn if they're malignant or benign, He's stuck in his Tyler Beach home. And, he's reliant on friends to help him change his medical drains. His lover, Paula Quinn, is assistant editor of the Tyler Chronicle. When she's not covering stories, she's home with Lewis. Or, there's his friend, former Boston mobster Felix Tinios. Even a local police officer, Diane Woods, helps now and then. But, it's hard for Lewis to get his mind off his surgery and the people who were lost years earlier to a biowarfare experiment.

When his neighbor, antiques dealer Maggie Tyler Branch is murdered, Lewis has something else to occupy his mind. Someone killed her with a shotgun, and Woods loses her case to the state. New Hampshire is in the middle of the opioid crisis, and there are hints that Maggie's murder may be part of that problem. Felix has a few clues for Lewis. And, it doesn't hurt for Cole to do research online.

This is a case that haunts Lewis. It doesn't help that two amateur genealogists want to get into his house. There are memories all around him, and he swears someone is in his house at night. And, it's not just the ghost of the woman who was the love of his life. Suddenly, Lewis' house and the locations around it seem to be ground zero for all of the investigations and local mysteries. "History. Here in this part of the world, it's all around us. But beware of what you look for, or what you dig up. You might just be goddamned surprised."

It's a case that taunts Lewis Cole, and leaves him trapped in his house while everyone seems to want in. It's a story that reminds me of several others with sleuths who were trapped, and had only their minds to investigate a case. I thought of Laura Lippman's The Girl in the Green Raincoat and, of course, Josephine Tey's classic The Daughter of Time. Brendan DuBois' Hard Aground is in good company.

Lewis Cole is an intriguing character with a past that is sobering when you read about it. He's a man who doesn't consider himself a writer, but a "snoop". He has an unusual small group of friends. The menacing atmosphere in Hard Aground makes for a fascinating book, with quite an ending.

I like DuBois' short stories a lot, also his non-series books very much.

Do you like the Lewis Cole books, Jeff, or just prefer the others?