Every Note Played by Lisa Genova 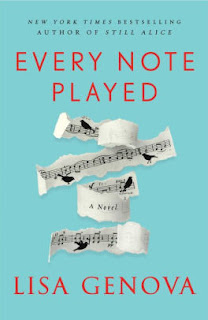 Lisa Genova is known for her fiction that involves people whose lives are changed by diseases that affect the brain - Alzheimer's, left neglect brain disorder, autism, Huntington's disease. Now, she takes on ALS with Every Note Played. While the progression of the disease is explained completely, there's a few issues with her characters.

This is the story of a divorced couple, Richard and Karina. They're forty-five, and met in college where they were both studying piano. Karina came from Poland, and, while in school, she was the more accomplished pianist. By the time of the story, Richard is world-renowned as a classical pianist.  Now that their daughter, Grace, is in college, Karina lives alone, giving piano lessons in the house in Boston where they moved early in their marriage. It's at a party that Karina learns Richard has cancelled his latest tour because he has ALS.

Viewpoints alternate as the reader learns about the progression of Richard's disease through his eyes, and through Karina's. When she's in town, and he accidentally calls her in an emergency, they both realize he has reached a stage where he needs more attention than he's getting in his condo. Karina offers to have him move back in, and she becomes his primary caregiver.

Did you notice the unemotional way I summarized Every Note Played? That's one of the two problems with the book. Every Note Played is very unemotional. It's interesting to see the progression of ALS. But, it's hard for the reader to care because the other problem is Richard. He's a selfish man, and there's very little reason to feel sorry for him. The characters lack emotion and depth in this story.

I loved Still Alice. I can't say I really enjoyed Every Note Played. It read like a textbook, rather than a novel. Interesting, yes. But, the characters were too cold, and it was hard to become emotionally involved in the book.

Unfortunately, that's what can happen when an author is more interested in making her point than creating interesting characters and letting their story unfold.

Hmmm...that's a shame that this book came across that way to you. I haven't read it yet, but I will at some point. I read Still Alice and recommended it to many - had to wait a bit to read it - too close to home when it was published, but I did tell some of the staff at the care homes my folks were in. I read Left Neglected and was so caught up in that one - had never heard of that condition. I also liked the one about Huntington's and the family who dealt with it. I haven't read her other book - about autism? Anyway, I like her enough to give this one a go. She has definitely made many conditions more human, while still giving so much useful info. Thanks for sharing with us, Lesa!

Jeff, I think it would have had more impact if the pianist was likable. I don't have to like a character, but, in this case, it was his ex-wife I felt for, not him.

Kay, I've read all her books except the Huntington's one. Still Alice remains my favorite because I think she may have felt the most about the character in that one. I just felt it was difficult to empathize with the man suffering from ALS. I'll be interested to see what you think when you read it.

I have read all of the except one, had this on CD. So far, Still Alice is my favorite. Too bad that she made him unsympathetic character. I have Mild Cognitive Impairment which is more often a precursor to some kind of dementia. I now know a lot of forms, there were at least four in my family who died of Alzheimer's and my cousin has Frontotemporal and my neurologist thinks I may have the precursor to Lewey Body so I am going to get a second opinion to see it there is an agreement with the prediction. The worst thing is that so far there is nothing for a cure. But Huntington's Disease has had some great advances.

Carol, I'm sorry. That must be frightening, to know that. I'm sorry.