Date with Malice by Julia Chapman 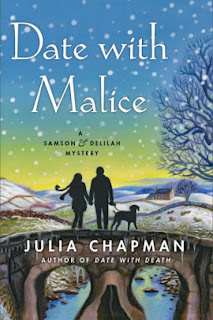 I'll date myself by saying the duo in this book will remind you of "Moonlighting". Julia Chapman's Date with Malice, the second in a series, is a suspenseful, humorous mystery set in the Yorkshire Dales community of Bruncliffe. You might not want to pack up as quickly as you'd pack to go to Louise Penny's Three Pines. The residents of Bruncliffe look at outsiders with a suspicious eye. But, there's a terrific bakery, and the townspeople support each other.

Some of them even support Samson O'Brien's Dales Detective Agency. The son of the town drunk returned home after a fourteen year absence. After his heroic deeds in saving several people, some of the townspeople even hire him. Alice Shepherd, a senior living at Fellside Court, an independent living facility, suspects someone is watching her, and plans to kill her. But, her interview is interrupted when a local farmer bursts in to announce his prize-winning ram is missing. In Bruncliffe, a ram means a farmer's livelihood. And, Alice is getting forgetful. So, Samson's priority is the missing animal. Then, Alice Shepherd dies.

Now, which investigation warrants more attention? While Samson is uneasy about Alice's death, no one has proof it was any more than any accident. While he looks for the missing ram, he also continues to pay attention to the worried seniors. Samson's own father is a resident there, but he isn't worried. And, then there's another accident.

Samson teams up with Delilah Metcalfe, sister of his dead best friend, his landlady, and owner of the Dales Dating Agency. Delilah still knows all the people and the local area, while Samson has been away too long. Despite their banter and their ongoing rivalry, the two care for the people in the community. If someone is killing off seniors, they want to stop it. And, about that missing ram...

Date with Malice is a delightful follow-up to Date with Death. The atmospheric mystery has a strong sense of place with the description of the Dales. But, it's the characters that shine. The relationship between Samson and Delilah is humorous. They're likable, appealing characters. In this book, the seniors are spirited assistants in the investigation. And, the family relationships are important.

Well-developed, interesting characters? Check. Strong sense of place? Check. Intriguing mystery storylines and ongoing suspense? Oh, yes. Who knows what's going to happen in the future stories in this series? Take a chance on the mystery, romance, and humor in Date with Malice.

Wow, this sounds good and I love to read the complete story of the novel. So I decided to download eBook copy for me. Thanks to aware me about such a great romance story.

Thanks to your review I just put Date with Death on my overloaded library list. We in this household are some of the best at keeping up statistics at our local small-town library.

Thanks for including my new French village mystery in your round-up!