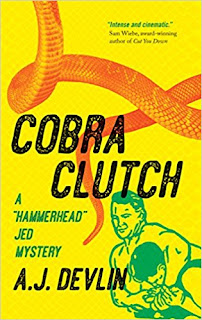 It's fun to read a debut author's first mystery. It's even more interesting when it's a book I never thought I'd pick up, but I discover I enjoyed the character and the story. In fact, I'll look forward to A.J. Devlin's followup to Cobra Clutch.

When "Hammerhead" Jed Ounstead retired from pro wrestling, he took a job as a bar bouncer. Occasionally, he helps his father, an ex-cop turned private detective, by running a few errands. He had no plans of becoming a detective, despite his father's hopes. But, when Jed's former tag-team wrestling partner shows up, Jed doesn't have much of a choice. He owes his successful career to Johnny Mamba.

Someone kidnapped Johnny's python, Ginger. He loves her, and he uses her in his entrance to the ring. He insists he can't wrestle without her. There's a ransom demand for Ginger. Jed agrees to look into it, but he doesn't make himself very welcome at the X-Treme Canadian Championship Wrestling building. But, before he can investigate further, Johnny Mamba and Ginger are murdered.

Now, it's more than a job. Despite the investigating officer who was his father's protege, Jed insists on looking for the killer. Jed involves his cousin Declan, a former IRA operative turned bartender. But, he can only help so far. Jed's house is trashed. He's beaten up, kidnapped, and nearly shot to death. He finds himself involved not only with the pro wrestling world, but with a case involving drugs and bikers. But, "Hammerhead" was more than a nickname. Jed isn't going to quit.

Cobra Clutch is a fast-paced, action-packed, debut. The violence is graphic. There are traces of humor, usually provided by Declan. But, the angry, flawed sleuth is bold and competitive in this gritty original story. If you tried and liked Glen Erik Hamilton's Van Shaw novels, give this one a try.

I have this one on order, and I'm really looking forward to it.

I'll be interested to see what you think, Glen.