Claws for Concern by Miranda James 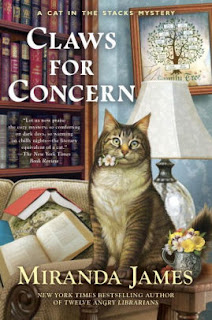 It's always a pleasure to return to Mississippi to the world of Charlie Harris and his Maine Coon cat, Diesel. Although Charlie gets involved in murder investigations, he's grounded with his job, his family, and good friends. It was time to pick up Miranda James' latest, Claws for Concern.

Charlie's too caught up in his new role of grandfather to be interested when an author wants to talk to him. But, Jack Pemberton does try to smooth the way, in traditional Mississippi fashion. One of Jack's friends is also a friend of the Ducote sisters, and she encourages Charlie to listen to the author. Jack is a true crime writer who is interested in telling some of Charlie's stories. As a southern gentleman, though, Charlie doesn't feel right talking about himself or putting himself forward.

The highlight of Charlie and Diesel's lives right now is the new grandbaby, Charlie. When his grandson's scheduled for a visit, Charlie's impatient to leave his volunteer job at the Athena Public Library. He still notices the stranger in the library, a man he'd started seeing in the last week. When the man finally gets around to asking for help, he finds an address in an old phone directory, and stuns Charlie when he asks if Charlie's Uncle Del is still around. When there seems to be a family connection, Charlie's interested in Bill Delaney's story.

But, Jack Pemberton has a warning for Charlie. It seems Bill was once involved in a shocking murder case. Instead of welcoming Delaney into the family home, or writing with Jack Pemberton, Charlie finds himself investigating a twenty-year-old case, teamed up with Pemberton. This case has family written all over it.

Yes, Charlie's latest case is intriguing. I'm always a fan of cold cases. It's fascinating to watch the sleuth dig into the past and try to put the puzzle together. But, the real reason I return to the Cat in the Stacks mysteries? It's Charlie and his world. It's a pleasure to read about a mature sleuth with a family he loves. They've had problems at times. And, Charlie's work life hasn't always been easy. But, he's a gentleman who loves his community, friends, and family. And, James makes this such an essential part of every story. It's a joy to return to a world where two charming males, Charlie and Diesel, enjoy their lives.

Lesa, Since I had a Maine Coon cat for over fourteen years this series got my attention right away.
I downloaded a sample of the first book to see if I am interested.
Another new author for me.

Charlotte, I hope you like the sample. I think you will once you meet Diesel, the Maine Coon cat. Miranda James (Dean James) is a librarian who owns cats. He has the library and the cat part down perfectly.

This is such a good series, so nice to just sit and read. And I always love the covers.

You're right on both counts, Grandma Cootie.

I’m truly looking forward to reading this series entry. I can’t believe that this got past me! Thanks for the great review.