A Shimmer of Hummingbirds by Steve Burrows 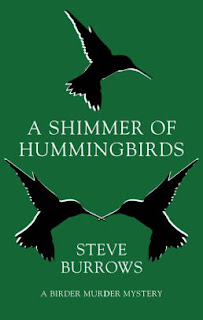 It takes a little time to figure out what's happening in Steve Burrows' fourth Birder Murder Mystery, A Shimmer of Hummingbirds. I hadn't read the previous books in the series, so I don't know the relationships. Burrows won the 2015 Arthur Ellis Award for his first book, A Siege of Bitterns. The author, and his character, Chief Inspector Domenic Jejeune, have both followed their passion for birdwatching.

Jejeune is in Colombia, although his boss doesn't believe he's really there to watch birds. The detective's brother has disappeared after he was involved in the deaths of four indigenous people. Jejeune is actually passionate about this birding trip, where he meets up with an old friend. But, of course, he's also looking for answers in the rainforest.

While Jejeune is gone, his nemesis, Marvin Laraby, takes over and steamrolls a murder investigation that involves a team of investors. But, the team keeps in touch with their boss, and Jejeune realizes Laraby is blundering toward the wrong solution.

Armchair travelers will enjoy the descriptions of the Colombian rainforest and the Norfolk forest. Fans of British police procedurals will appreciate the details of the investigation. I'll admit I wasn't as interested in the bird watching aspects of the book as in other elements. And, I'd advise readers to start with the first in the series. Since I haven't read the earlier books, I can't comment about the continuing storylines and characters. But, Burrows hints at ongoing problems at the conclusion of A Shimmer of Hummingbirds.

I love, love, love Steve Burrows' books. I have read his earlier books and am fascinated by the birding aspect. He writes intelligent police procedurals and although occasionally I think he stretches to solve the cases and I can anticipate what will happen, I am ready to forgive because he tells such a good story.
Right now this book is on my kindle waiting for me.

Then, I know you're going to enjoy this one, Diane.