A Necessary Evil by Abir Mukherjee 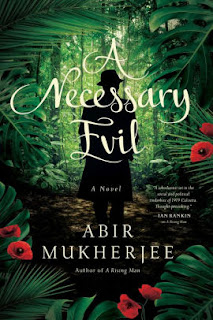 Abir Mukherjee follows up the success of his debut novel, A Rising Man, with another richly detailed mystery set in 1920s India. And, for all of us who didn't read the first mystery, there's no problem in picking up the story of Captain Sam Wyndham and Sergeant "Surrender-Not" Banerjee. A Necessary Evil is a complex, fascinating story of a little-known culture.

Because Banerjee went to school in England with the son of the Maharajah of the wealthy kingdom of Sambalpore, the two are sent to meet with the Crown Prince. It was essential that Sambalpore agreed to join the Chamber of Princes in order to persuade the restless natives that the British government did listen to their demand for home rule. But, before Banerjee learns why his presence was requested, the Prince Adhir is assassinated in their presence. Now, the two are tasked with investigating the murder, while pretending to be in attendance only to attend the funeral.

The aging Maharajah of Sambalpore is the fifth richest man in India, and the lifestyles of his sons and wives reflect his wealth. While the new Crown Prince flirts with the woman that Wyndham admires, Sam does his best to see past his own prejudice when he has to investigate another murder. In this secretive world, lived behind walls that most Englishmen never see, the two officers discover power and rules that don't reflect British rule.

Captain Sam Wyndham is a complex man, the narrator of this fascinating story. He's an addict who lacks respect for anything. He's a forthright, brooding character, flawed and introspective. He works well with the quiet "Surrender-Not", who sometimes covers up for Wyndham. But, Sam is candid about his own flaws.

Mukherjee takes readers into a rich, atmospheric story. It's dramatic, with moments of humor, usually involving Wyndham. A Necessary Evil is an intricately plotted, elaborate mystery with a strong sense of place. If you're looking to read a complex story with a fascinating history and characters, try either of the books in this remarkable series.

As you know, I read the first one and liked it very much. I just put this on hold.

I just looked at the library website and it is already in transit.

Excellent, Jeff! You should have it any day then.