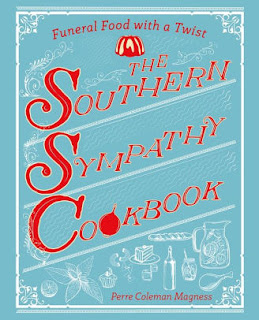 I was hoping for a cookbook with recipes I could take to potlucks (carry-ins in southwestern Indiana).
Instead, I found a cookbook that made a number of changes to traditional recipes, so they weren't quite what I expected. But, I did enjoy the obituary clips and the stories in Perre Coleman Magness' The Southern Sympathy Cookbook: Funeral Food with a Twist.

Magness' cookbook has an interesting format. Because it's supposed to feature comfort food to take when someone dies, or when someone needs carry-in food for sickness or birth, but mostly funeral food, the chapters are broken down into interesting titles. There's "The Great Awakening: Breakfast and Bread"; "The Pearly Gates: Starters and Snacks"; "The Eternal Garden: Fruit and Vegetables". "The Gospel Bird" has chicken recipes. "Crowning Glory" is meat. And, naturally, "The Sweet Hereafter" is desserts and sweets.

The author adapted recipes to fit her own tastes or to make them healthier. She also admits her cakes aren't quite what people would expect because she doesn't make the towering layer cakes expected by Southerners. But, I was pleasantly surprised to see a recipe for Divinity, a candy my grandmother used to make.

For me, the highlight of the cookbook were actually the anecdotes about food, and the obituary notes. Here's one from an obituary in Columbia, Tennessee. "(She) epitomized the Southernn Lady in her life's three ambitions. As a wife, her support was without limits. As a mother, her love was without condition. As a friend, her hospitality was without distinction."

What I was really looking for in The Southern Sympathy Cookbook, and failed to find, was what I see as comfort food. And, maybe my tastes are different than Magness' because I'm from the Midwest. But, I was also raised to take food to the recently bereaved, or to someone's house when they are sick. I just don't think this cookbook epitomized what I was thinking of when I read this quote. It's from Garden Metcalfe and Charlotte Hays, Being Dead is No Excuse. "Nobody in the world eats better than the bereaved Southerner."

Since I’ve spent all of my life in the Northeast I don’t tend to find any familiar recipes in Southern cookbooks.

Well, I usually do, Sandy, since I lived in Florida for eighteen years. I think it was the adaptations she made that disappointed me. (I donated the book to the library.)

I haven't heard the phrase carry in, must be very regional. I Have a small cache of recipes that are easy to freeze in those disposable pans, or I make cookies.

It is "very" regional, Holdenj. I'd never heard it either, and I'm from Ohio. I was told it's a southwestern Indiana term.