Tart of Darkness by Denise Swanson 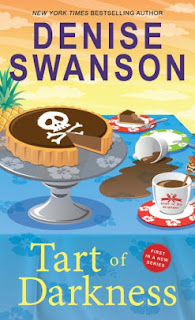 Cozy mystery readers may recognize Denise Swanson's name from the popular Skye Denison mysteries set in Scumble River, Illinois. Those books became the "Welcome Back to Scumble River" series. Now, she launches a new series that has a few ties to the past, with Tart of Darkness.

When Dani Sloan inherits a mansion from a friend of her grandmother's, she realizes it's the perfect opportunity to open her dream catering business, Chef-to-Go. She's also going to provide sack lunches for college students who attend Normalton University. That may include her three new tenants. Ivy Drake had become a friend of Dani's when they lived in the same apartment complex. But, Ivy and her two roommates were thrown out, and their parents make Dani an offer. If the girls can live with her, they'll pay rent, put in hours helping with her business, and Ivy's uncle, Spencer, will check on the girls once a week.

It all works until Dani reluctantly agrees to cater a luau for Regina Bourne, a rich college student whose parents are out of the country. Before it's all over a drunk young man sets fire to a table, and Regina dumps a tray of drinks over Dani's head. When the spoiled rich girl is found dead the next day, an out-of-control police detective accuses Dani of killing her.

When Ivy calls her uncle for help, Dani finally meets the man who is head of security at the university. He's much younger, and better looking, than Dani had imagined. Once Spencer hears the story of intimidation, he agrees to partner with Dani to find someone who had the opportunity to kill Regina Bourne. It isn't long before they discover that a number of people had reasons to want her dead.

Swanson's first in the new series is typical for the first in any cozy mystery series. The amateur sleuth quits her job, starts a business, becomes a murder suspect, and, sometimes with the help of an attractive man, find the real killer. This time, though, the experienced author has a few differences. The attraction is there, but both the amateur sleuth and her partner in crime-solving fight their feelings because they've both been burned in the past. The biggest difference is in the killer. When the killer is uncovered, there's a great deal of sympathy for the killer rather than the victim.

Tart of Darkness is the first in the new Chef-to-Go series. The premise, with a catering and pick-up business, has a great deal of potential for future crime-solving. And, of course, the college students and college environment always provides scenarios for mystery. We'll see what happens in Swanson's experienced hands.

I’m getting this from the library so I’ll give it a try. Unless I really like the characters I find a lot of new cozy series are gettin to formulaic. It’s hard to find one that’s really different

Sandy, They're all formulaic in the first book. I agree. And, I've mentioned that in a few reviews. Now, whether or not they're unique enough to make you care to read the second is another story.

A great first in series! Denise Swanson is a new to me cozy author and after reading this book I am hoping to read more of her cozies.
A fun premise, interesting setting, and engaging characters! A great mystery that will keep you guessing until the end.
I also enjoyed the food descriptions which is always a plus when reading a cozy mystery!

I agree! I enjoy the food descriptions in cozy mysteries as well.