April Treasures in My Closet

February went fast. It's already time for Treasures in My Closet, books that will be released in April. Let's get started. We have quite a few titles to get through.

Commissaire Dupin returns in Jean-Luc Bannalec's The Fleur de Sel Murders. The old salt farmers have always said that the violet scent of the flour de Sea at harvest time on the salt marshes has been known to cause hallucinations. Dupin starts to believe that when he's attacked when he's snooping around mysterious barrels on behalf of a journalist friend. When his friend disappears, he's assigned to the case. (Release date is April 24.)

I'm going to come right out and say Rick Bragg is one of my favorite nonfiction authors. His words are pure poetry. And, I've already started The Best Cook in the World...Tales from My Momma's Table. It's a cookbook. It's a memoir of his mother's life. It's Rick Bragg, the storyteller. (Release date is April 3.)

Josie Prescott returns in Jane K. Cleland's Antique Blues. Soon after she's asked to appraise a Japanese woodblock print, the owner is murdered. Josie works closely with the police to find if the murder was personal or related to the art. (Release date is April 24.)

The seventeenth Coffee House mystery by Cleo Coyle, Shot in the Dark, is one of my favorites. When a hot new app for dating turns the Village Blend into a hookup spot, it also drags Clare Cost into another murder investigation. Now, she fears a loss of business if the Village Blend is associated with murder. (Release date is April 17.)

In Janet Dawson's The Ghost in Roomette Four, it's 1954, and Zephyrette Jill McLeod sees a shimmering light that may be a ghost. Is it the spirit of a young man whose body she'd found a few months earlier in the same train compartment? And what message is he trying to send? (Release date is April 7.)

You might not think I'd care for a debut mystery featuring a former pro wrestler turned bar bouncer. A.J. Devlin's first "Hammerhead" Jed mystery, Cobra Clutch, is an outstanding debut. When Jed's friend and former tag-team partner is killed, he finds himself in the world of bikers and drugs, looking for a killer. (Release date is April 15.)

Neal Griffin's third Newberg novel is By His Own Hand. Former Marine Tia Suarez has made a name for herself in the Newberg PD: troublemaker, seeker of justice, a good cop's best friend and a bad cop's worst nightmare. When a Native American teen is found dead on the grounds of a Christian religious retreat, Tia is determined to find out who killed him, even though everyone stonewalls her. (Release date is April 17.)

Three Strikes, You're Dead is the third Eddie Shoes mystery by Elena Hartwell. Private investigator Eddie Shoes heads to a resort to spend a mother-daughter getaway weekend with her mother. But, when she goes on a hike, and stumbles across a dying man, he gives her a rosary and asks her to find his missing daughter. Eddie barely escapes from a forest fire, and wakes in the hospital, knowing she's working for a dead man. (Release date is April 1.)

Undercover agent Fia McKee returns in Sasscer Hill's The Dark Side of Town. McKee is now officially employed by the Thoroughbred Racing Protective Bureau, and is sent undercover to Saratoga Racetrack to investigate a racehorse trainer whose horses' wins are suspiciously lucky. But after she witnesses the suicide of a jockey, Fia discovers the death is only the tip of an iceberg. (Release date is April 17.)

The latest Maggie MacGowen mystery by Wendy Hornsby is Number 7, Rue Jacob. Maggie arrives in Paris at the Left Bank apartment she inherited from the mother she never knew, planning a romantic reunion with her fiancé. But, his phone call summons her on a shared nightmarish odyssey across Europe, as they try to stay ahead of a predator who's using every possible surveillance device to stalk them. Then, their unknown enemy turns to the Internet to offer a reward for their capture. (Release date is April 7.)

Mike Knowles introduces three crooked cops in Tin Men. But, it's one of their who has been murdered. Detective Julie Owen was savagely killed in her own bed, and the unborn child she was carrying is nowhere to be found. All three men have reasons to want to find the person responsible for Julie's death. And, they're going straight after the murderer. (Release date is April 10.)

The third Mortimer Angel mystery is Gumshoe on the Loose by Rob Leininger. IRS agent-turned-PI Mortimer Angel is relaxing in a hole-in-the-wall bar in a Reno casino when an attractive young girl hires him to find out who left her a cryptic message demanding a million dollars. At her home, Mort finds the body of a missing rapper, hanging from the rafters with two bullet holes in him. Mort is shocked when he learns the identity of the girl's father, and even more shocked when he's hired to investigate the murder. (Release date is April 3.)

The latest Max Tudor mystery, In Prior's Wood by G.M. Malliet, finds Max back home, hoping for routine. But, the lady of the local manor house is found in a suicide pact with her young lover. And, Lady Daxter's husband seems to rally a little too quickly, hosting a writers' retreat. But, a young girl goes missing, a crime writer becomes a target, and Max is roped into the investigation. (Release date is April 17.)

The latest Hogarth Shakespeare offering in Jo Nesbo's Macbeth. It's a story of love and guilt, political ambition, and greed. It's set in the 1970s in a run-down, rainy industrial town, a town where the police force struggles with a drug problem. Duncan, the chief of police is idealistic and visionary. The drug trade is ruled by two drug lords, including one named Hecate who plots to manipulate Inspector Macbeth, the head of SWAT, and a man susceptible to violent and paranoid tendencies. (Release date is April 28.)

Readers return to Edinburgh, Scotland with the latest Scottish Bookshop mystery, Lost Books and Old Bones by Paige Shelton. Delaney Nichols has found some medical school friends, but when one of her new friends is found murdered outside the bookshop where she works, her interest in the history surrounding the med school sends her headlong into the investigation. (Release date is April 3.)

Denise Swanson kicks off a new series with Tart of Darkness. Dani Sloan's new catering company, Chef-to-Go, is threatened after a young woman is killed soon after Dani caters a party at her home. Dani not only has to clear her name and save her business, but she has to clear the college students who are renting rooms from her, while working for the business. (Release date is April 3.) 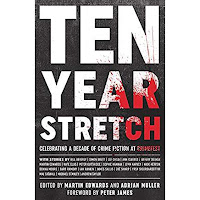 When a former TV producer, once a murder suspect, is shot at by a sniper, he accuses former SWAT sniper Trey Seaver. Trey and his lover, Tai Randolph, set out to find the sniper, and the real killer of the man's wife. It's Tina Whittle's Necessary Ends. (Release date is April 3.)

Remember the high school athlete that became a legend? That's Duke Ducheski in Robin Yocum's A Perfect Shot. At forty, he finally decides to parlay his reputation as the local sports legend of Mingo Junction, Ohio into a future. He opens a restaurant, Duke's Place. But, as soon as it's running, his brother-in-law, a local mob enforcer, comes in and murders Duke's oldest friend. "Little Tony" thinks he's untouchable, but he hasn't counted on Duke, who discovers a way to take him down. But, he's going to have to leave Mingo Junction and leave behind his reputation as the local legend. (Release date is April 17.)

And, here's the list of the books I didn't annotate. There are some books on this list that I should have summarized, but I just ran out of time.

Which books entice you?

I like Jo Nesbo so will definitely check out that new one. We are expecting bad weather coming in tonight and tomorrow but I am all set with books to read! Wishing everyone a nice weekend.

Stay warm & safe, Donna. If you're all set with books, there's no reason to venture out. Have a good weekend!

I Already have the new Cleo Coyle book on hold at the library and the new series by Denise Swanson sounds interesting.

Wow! That's a lot of books. Several look like ones I'd like to try. I'm so behind on Cleo Coyle's series - I've got to catch up.

I agree, Kaye - Rick Bragg, always! I am not at all surprised by your other choices. (grin)

April's a big publication month, Kay, if the numbers of books are any indication. That's why I just couldn't get to everything.

I read Gumshoe on the Loose. I was never really sure whether it was supposed to be a parody or not.

I already have the Cleo Coyle and Jane K. Cleland books on hold at the library because they are the latest in two of my favorite cozy series. I'm hopeful about G.M. Mallett's new book, although I wasn't satisfied with her last two. I need to put Meg Wolitzer's book on hold as well, because her book, The Interestings, was wonderful, and I've enjoyed several others of hers as well.

I really liked Cobra Clutch, Glen. Good to know about Gumshoe on the Loose. It may move piles at my place.

Margie, I felt the exact same way about Malliett's last couple books. I'll give this one a shot, though. But, three strikes, you're out. If this one doesn't live up to expectations, that may be it for me. I like the timeliness of Cleo Coyle's books. And Jane K. Cleland's just continue to get better.

Bragg's first book was a favorite of mine too.

That one was the best, Jeff, but I'm really enjoying this one. He has so much love in his "voice" when he talks about his mother. And, these are the most interesting recipes I've read.

So many enticing books in just one month! I have to read the French mystery, bien sur, but also Jane Cleland's latest, and, and... Thanks for the heads up about new releases.