A Funeral in Mantova by David P. Wagner 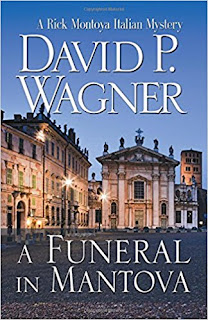 If David P. Wagner's A Funeral in Mantova doesn't make you yearn for a trip to Italy to eat authentic Italian food, I think there's something wrong with you. I know that's not the purpose of Wagner's latest Rick Montoya Italian mystery, but the author brings the food and setting of the Lombardy region to life in this atmospheric book.

Rick Montoya is an American translator living in Rome where his uncle, a top official in the police department, often steers business his way. A wealthy American, Angelo Rondini, finds Rick through Italian channels, and hires him to be his interpreter in Mantova. Although Angelo was born in Italy, his parents emigrated when he was an infant, and he has never been back. Now, Angelo wants to attend the funeral of Roberto Rondini, the cousin he never knew, and meet his niece. Inspector Giulio Crespi introduces himself to Rick at the funeral, and asks him to talk to people who knew the dead man. It seems the police don't believe Roberto died by slipping and hitting his head when he was fishing.

After introducing the possibility of murder to his new boss, Rick asks questions of others in the dairy farming community, and acquaintances of the dead man. It seems Roberto Rondini was not universally liked. He had been involved in issues over land ownership, fishing, and politics. While Rick researches the stories behind Roberto, he also uncovers family history. And, some of that history  may surprise Montoya's new boss.

While Rick Montoya is a likable amateur sleuth, it's fascinating to watch the changes in Angelo Rondini as he discovers his family, the Italian culture, and his family history. Despite his businesslike abrupt nature, he has a yearning for his roots that comes as a surprise even to him.

It's characters and history that lead to the solution of this mystery. But, it's the setting and food that create the inviting atmosphere. Wagner makes excellent use of his knowledge of the Lombardy region, its food specialties, and the local culture. A Funeral in Mantova invites readers to appreciate the region with all its richness.

You may come to attend A Funeral in Mantova. You'll leave, wishing you had time and money to linger.

Oh, this is wonderful. I'm an avid mystery fan, and I especially like mysteries that take place in other countries. (I consider them free trips abroad.) I"ll really have to get a copy of this book. Thanks for such an excellent review.

You're welcome, Elizabeth. And, I had never read one of Wagner's books before. You can certainly start with this one with no problem. It really is a "free trip abroad"!