The Hanging Tree by Ben Aaronovitch 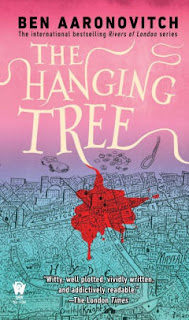 Ben Aaronovitch continues to add diverse and interesting characters to the books in his Rivers of London urban fantasy series. The Hanging Tree is the sixth book, and it brings Police Constable Peter Grant back to London for discoveries of more magic running rampant.

Nightingale's small team (really, Nightingale and Peter) is struggling to cope with the increase in magic. At the moment, they can call on the resources of Dr. Walid to analyze the corpses and DNA of practitioners, and Dr. Postmarten to investigate the books dealing with magic. Now, Walid adds Dr. Jennifer Vaughan, a Welsh woman to his team.

And, they'll need all the help they can get. Lady Tyburn, goddess of the Tyburn River, and daughter of Mama Thames, has her own daughter. When a friend of her daughter's turns up dead after a party, Lady Ty calls on Peter. She doesn't want her daughter involved, and Peter owes her a favor. When Olivia Jane McAllister-Thames confesses, there isn't much Peter can do. But, the resulting flooding can only come from one source.

Before they know it, Peter and Nightingale are involved in the affairs of the rich and influential. There's a disaster at Harrod's. A strange group of American practitioners are in the way. Reynard Fossman, a sly man with connections to fables involving a fox, offers a rare book to anyone with the money to buy it. And, of course, the Faceless Man is interested in that book, as are other practitioners of magic. Once again, Peter and Nightingale have a mess on their hands, one that grows to disastrous proportions.

The Hanging Tree is a fun addition to the Rivers of London series. Aaronovitch continues to draw from history and mythology, and he incorporates elements beautifully into this latest book. The wit and sly references to other books provide humor, along with Peter Grant's own dry observations.

Unfortunately, I'm caught up with Aaronovitch's series. Now, I have to wait with all of his other fans, for the next in the series.

Ben Aaronovitch's blog is at http://temporarilysignificant.blogspot.com/

Note: I always enjoy these type of dedications. "This book is dedicated to all librarians everywhere - for they are the true keepers of the sacred flame and not to be trifled with."

Now you're three books ahead.

Well, I won't be any further ahead, Jeff, until a new one comes out. That's it for now.

I like to re-read this series and Christopher Fowler's Bryant & May series regularly (although both series make me envious of living in a place with such history). Not that I do want to live there but.... Both brilliant writers writing brilliant books. Keep going lads.

Chris, Both series are favorites of a friend who spends at least 2 weeks a year in London. I need to get around to the Bryant & May series.