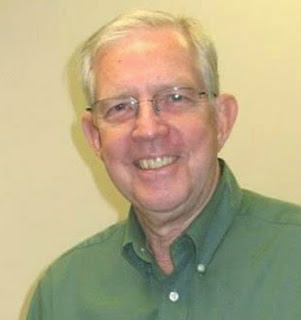 Bill Crider's brother, Cox Robert Crider, announced Bill died at 6:52 PM CST, Monday February 12, 2018. We knew Bill's death was coming. He himself announced there that he was going into home hospice, suffering from cancer. His family has been generous and kind to all of Bill's followers, sharing their memories and photos, as they updated Bill's health. It's never easy to watch a loved one die. But, how difficult it must have been for them to watch while letting all of us who admired Bill to share their laughter and sorrow in these final couple months.

I'll have a longer tribute to Bill Crider on Wednesday. Rest in Peace, Bill.
Posted by Lesa at 1:30 AM

I was going to write to make sure you saw this.

Jeff, I'm so sorry for your loss. I know you and Jackie and Bill were friends.I've written a tribute for tomorrow, but I'm sure it won't do justice to the friend you knew. I'm sorry.

Sad for everyone.
He will be missed.

He will, Charlotte. And, he'll be missed here, too. For a long time, Bill participated on Thursdays in What Are You Reading?

Jeff, since Bill was your friend maybe you might know the answer to my question. Is his daughter taking his fur babies home with her. He loved them.

Lesa, I enjoyed the writings he shared with us here.

Charlotte, the VBKs are with Bill's niece in Austin. They were moved last week.

Charlotte, To add on to what Jeff said, she not only moved them, but she made a Facebook page for the VBKs because so many of us enjoyed their antics.

I know, Glen. I'm doing a longer tribute to him tomorrow on my blog.

He was a one-in-a-million gentleman, the likes of whom we will not see again anytime soon. RIP dear man.

Ah, David, you used the word I used at the end of tomorrow's piece, "gentleman".