Hummus and Homicide by Tina Kashian 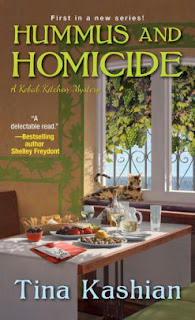 After eight years as a patent attorney, Lucy Berberian loses her job and returns home to Ocean Crest. Her parents own the Kebab Kitchen Fine Mediterranean Cuisine restaurant there, and, once they had hoped Lucy would marry her boyfriend, Azad, and take over the family business. That changed when the two broke up while in college. Now, Lucy's parents are ready to sell the business, possibly to Azad. Not everything changes, though. Heather Banks, a mean girl in high school, is now the equally nasty new health inspector. And, Lucy and Heather never did get along. That doesn't mean she killed Heather, even though Lucy serves Heather's last meal and stumbles over the body outside the restaurant.

It's too bad Lucy and Heather had a loud "discussion" before Heather's death. And, it's too bad the investigating police officer was dumped by Lucy's sister. Lucy may be a suspect, but the family restaurant is dependent on the discovery of the real killer. And, Lucy's father wants her to investigate. "Family helps family. Find out who did this." Lucy's best friend, Katie, is eager to help. She's married to a cop, and watched plenty of cop shows on television.

Hummus and Homicide is representative of the cozy mystery. The amateur sleuth loses a job, returns home to the family business that she once fled, gets caught up in it once again, becomes a murder suspect, finds two men who are interested in her, and solves the crime before discovering that she loves being home again. While there's nothing exceptional about this debut of the Kebab Kitchen mystery series, there is an appealing cast of characters and a couple mouthwatering recipes. However, it's going to have to compete with all the other cozy mysteries out there, including other ethnic ones such as Kylie Logan's Ethnic Eats mysteries and Susannah Hardy's Greek to Me mysteries.

I have this on hold from the library so I’ll give it a try but I’m getting tired of predictable stories so I have to either like the author or the characters to finish a new mystery these days.

I must say that this does sound like she ticked off a list of every element of a certain type of cosy series.

You'll have to let me know what you thought, Sandy.

Jeff, There was a time when publishers gave authors a list to tick off - I think mostly in the romance genre. You're right. That's how it felt with this one, I'm sorry to say.