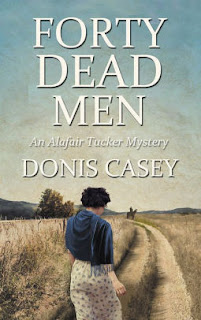 Casey's latest Alafair Tucker mystery. But, when veterans of the "War to End All Wars" returned home in 1918, PTSD was not recognized as such. However, Alafair Tucker knows something is wrong in Forty Dead Men.

Alafair Tucker's extended Oklahoma family is thrilled to have the oldest son, Gee Dub, home from France. But, all the children and grandchildren become a little too much for Gee Dub at times. He spends his days riding his horse, just appreciating the quiet. While out on one of his trips, he comes across a young woman who is worn out from walking. He brings Holly Johnson home. While he's fascinated by her, Alafair is welcoming, but watchful.

Alafair already knows her son is troubled, and she's found two almost empty boxes of cartridges under his pillow. Alafair's father-in-law tells her those are "forty dead men". As a young recruit, he was given two boxes, and told not to waste them, "cause the man you miss may be the one who kills you". There's still one cartridge in Gee Dub's boxes. She's not sure the son who returned to Oklahoma is the Gee Dub who left for war.

Holly Johnson's story is a war story, but it only becomes worse. She married Daniel Johnson in Maine before he shipped out. Then, she stopped hearing from him, so she took a train, then stopped to work, and sometimes walked, to get to Oklahoma and find him. When Sheriff Tucker tells Holly they found Daniel's body and buried it, she pulls out a picture, only to discover the man they buried wasn't her husband. And, when they track down Daniel Johnson, they discover he wasn't her husband at all. Daniel Johnson was already married.

When Daniel Johnson is killed, Holly's protector, Gee Dub, is the main suspect. He won't provide an alibi, and his last bullet is missing. But, Alafair Tucker will do everything necessary to protect her oldest son.

Forty Dead Men is a tragic, bittersweet story of a returning veteran and PTSD. While there's a mystery, the story actually revolves around Gee Dub. Even if you haven't read the previous Alafair Tucker mysteries, you can pick up this book. And, if you're a fan of the Ian Rutledge mysteries, you might want to meet another veteran of World War I.

I am almost halfway into this one right now. Enjoying it so very much. I love Donis' series. I hope she continues writing it! I'll likely have a review up early next week.

I love Donis' series, too, Kay.

This sounds like a heart-rending story. I've been reading a lot about post WWI issues for a YA I'm writing, even though the characters involved are peripheral to the main story. A tragic war, with tragic consequences. I also like mysteries set in the context of history, so this book looks like a must read for me.

Elizabeth, I think it is a must read for you because Gee Dub actually isn't too old. He's in that New Adult age group librarians talk about.

Interesting, especially as I am currently reading THANK YOU FOR YOUR SERVICE, about the veterans coming back from Iraq with serious PTSD as well as physical injuries.

We know too many people with loved ones who are suffering in this way.

There seem to be a number of mysteries addressing this issue right now, Jeff, even when they address it on a historical basis.