Those of us who are avid mystery readers usually like to start at the beginning of a series. When Sandie Herron sent me the reviews of the audiobooks of Victoria Laurie's Psychic Eye series, she was wise, and started with the first in the series. Today, thanks to Sandie, we have a review of the audiobook of Laurie's Abby Cooper, Psychic Eye. 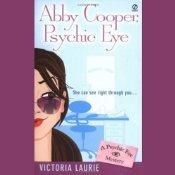 I really enjoyed the introduction to the Abby Cooper series by Victoria Laurie.
I've never been to a legitimate psychic, and I found her "reading" process fascinating.
It was always fun when she called out an impromptu reading or impression to the person
she was talking with, not intentionally doing a reading. The recipient of this mini-reading
is almost always surprised and shocked.
Abby's calendar was full to overflowing, booked months in advance. When Abby did a reading, she recorded the entire session on tape. It seemed a bit odd to me that she then handed over the tape to the client without making a copy or even making notes, as far as I could tell. Some of those notes might have helped her when the police came calling with one of her tapes taken from the victim's pocket. For this story, the reading was extremely recent, so Abby remembered many of the details, but I wonder how clear all those details from clients seen infrequently would stay.Abby was fortunate to have so many friends help her out when she ended up in danger and couldn't go to work, for instance, and her entire schedule needed to be changed. She had a great handyman who worried about her, too, and performed great feats for Abby in fixing many construction projects.It was the police officer who Abby fancied. They'd actually met first via a dating service where they had gotten along. When she needs a friendly neighborhood cop, she's glad it's Dutch. They had an instant camaraderie on the police case because of it, and Abby didn't want that friendship to distort the help she had offered to the police.Abby's psychic ability was incredibly well accepted by her co-workers and clients. I was glad when Dutch began looking up the history of psychics in general as well as psychics from a law enforcement point of view. His behavior seemed reasonable and fair. The description originally given to "Dutch" led me to believe that he was younger than I suspected. It was later revealed that he had a serious relationship eight years prior, so that gave us an inkling of his age to be about 30. Abby's age was also later revealed to be about the same. I found, however, that the narrator's voice sounded older than the way Abby was portrayed; her age was given in the second book as well which reinforced my feeling that an older woman than Abby was narrating.  However, she had loads of life in her voice and portrayed a good range of emotions so eventually this age feeling fell away and was forgotten.  This only occurred in the audiobook, so it does not reflect on the printed copy.  Sandie Herron
Posted by Lesa at 4:00 AM

I’ve enjoyed reading this series but have never heard it on audio.

I'm not a listener of audio, Sandy. Fortunately, for us, Sandie Herron is.

It's time for me to get back to this series, but in print.