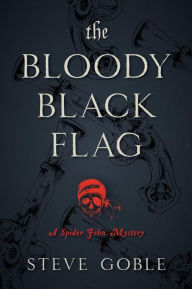 "Spider John Rush resigned himself to the hard truth - he was returning to a world of cut and thrust, hide and pounce, blood and smoke, pitch and tar." No one who reads Steve Goble's debut mystery, The Bloody Black Flag, will want to sing "Yo Ho A Pirate's Life for Me." Goble's book is intense, action-packed, and gritty and bloody. It's also rich in historical detail about a pirate's life. And, it's a terrific mystery with nothing similar. Maybe Patrick O'Brian's seafaring novels. Maybe "Pirates of the Caribbean" movies. But, I can't think of another pirate novel in mystery fiction.

After a fight and knifing in a Boston tavern, Spider John Rush and his friend Ezra escape by joining the crew of a pirate ship, Plymouth Dream. For Ezra, though, it's one bad turn after another. Someone on the ship recognizes him, and whispers start that Ezra's mother and grandmother were hanged as witches during the Salem madness. And, when Spider John wakes to find Ezra dead one night, everyone shrugs and says he was drunk and it was an accident. But, Spider John suspects murder, and he's determined to find justice for his dead friend.

Now, Spider John just has to stay alive long enough to find a killer amongst a crew of seventy. And, every man onboard, including John himself, has killed before. As ship's carpenter, Spider John has the chance to move around the ship and listen to whispers. Those whispers only grow louder when the ship goes to battle against another ship. But, with each death on the ship, Rush fears the killer will not live to face Spider John.

Goble's debut novel introduces a fascinating character in a historically interesting setting. Spider John Rush's backstory leads from Nantucket and a whaling ship to a pirate ship in 1722. There are stories of other pirates and other ships in this brutal, atmospheric novel. If you like a compelling page turner, bloody, but filled with historical detail, try Goble's mystery, The Bloody Black Flag.

Sounds fun, but you should have saved it a week. September 19th is International Talk Like a Pirate Day.

Well, darn, Jeff. I should have saved it!

I loved all the historical details, Glen.