Travels with Charley in Search of America by John Steinbeck 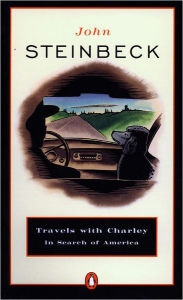 As I mentioned a few days ago, I was reading John Steinbeck's Travels with Charley in Search of America. Sadly, one of the final episodes in the book is still being played out fifty-six years after publication of the book. Steinbeck wrote about America and its people with love and a little humor, but he didn't find any humor in the hatred in New Orleans when the U.S. Marshals had to be brought in to integrate a school. The violence and bigotry and hatred in Charlottesville, Virginia would probably bring back memories for the author. And, on a personal note, which should not be considered part of the book review, I resent that the white marchers are called white "nationalists". They don't represent the nation I love. They represent that bigotry and hatred that Steinbeck viewed in New Orleans, and that still haunts this country.

The book is Steinbeck's account of a three month journey he took, accompanied by "an old French gentleman poodle known as Charley". The two traveled across the northern part of the United States, down the western coast, and home on the southern route in a truck he called Rocinante after Don Quixote's horse. They tried to avoid major highways when they could, traveling more than 10,000 miles. And, along the way, Steinbeck talked to people here and there, looking for American thought and spirit.

Steinbeck's keen observation is that his book only represents the America he saw, and that other travelers will see a different country. Everyone's view is different based on their own experiences. His view of Yellowstone, accompanied by a poodle who suddenly turned into a ferocious beast when he saw a bear, was funny and out of character for the dog. However, others won't have that same short-lived view of Yellowstone. And, Steinbeck's longing and feelings of home and loss when he returned to Monterey and Carmel and San Francisco is based on his past life there. It's not a feeling others will share.

Travels with Charley in Search of America may represent only John Steinbeck's journey. But the author takes the place of so many of us with his observations, his loneliness at times, his view of traffic and cities, his need for human contact. And, John Steinbeck brings an acute awareness and a poet's language to a book that stands the test of time.

And, as I said, unfortunately, there are parts of the book that still ring true.

Travels with Charley in Search of America by John Steinbeck. Penguin Books. 1962. 214p.

No, not nationalists. Here they are calling them "white supremacists," which is their fantasy, as there is little to back that crap up. It's like calling yourself a "Christian" as you explain why others should be locked up or deported. Nothing Christian about that.

Right there with you, Jeff.

No. Not nationalists. never.

I read this book many many years ago, but now, Dear Lesa, you have nudged me to pick it up again. and I'm looking forward to it. It'll be interesting to see what I remember, and if I remember it differently.

It's a moving book in so many ways, Kaye. But, that scene in New Orleans is horrifying.