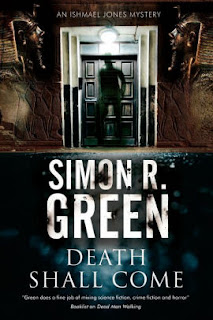 Why do I like Simon R. Green's books so much when they're creepy and violent? After reading his latest, Death Shall Come, I believe I have the answer. First, I'm a sucker for a locked room mystery, and all of the Ishmael Jones stories are locked room mysteries. Then, there's Ishmael Jones himself. He's an alien from outer space who crash landed on earth, but fights to protect humans. And, time after time, the evil isn't human, or not human as we recognize it. Sometimes, it's just nice to know all monsters are not human.

Ishmael Jones works for the Organization, a secret, powerful group. His latest case starts in the Egyptian rooms at the British Museum where he meets his regular contact, the Colonel. This time, the Colonel asks Ishmael to take on a personal case for him. He asks Ishmael to come to Cardavan House where the Cardavan family owns the largest collection of Egyptian artifacts in private hands. The Colonel knows something is wrong, but the family is gathering to see George Cardavan's latest acquisition, a sarcophagus supposed to hold the body of the first Cleopatra. The Colonel requests Ishmael's help and expertise because he wants to protect his wife, George Cardavan's daughter.

Ishmael doesn't keep secrets from his partner and love, Penny Belcourt, so they set out for Cardavan House. Their job, as always, is to protect people from monsters, and solve mysteries. And, they're not at Cardavan House long before one of the family is killed. As Penny says, "A family gathering in a dark old house and a mummy with a curse on it...Someone was bound to be murdered!"

Of course someone was bound to be murdered. That's why Green's locked room puzzles are entertaining. There's always touches of humor. When Penny continues to mention that the mummy might be the killer, Ishmael asks, "You honestly think a shriveled -up two-thousand-year-old body killed a man and is currently wandering around the house?" The stories meet expectations, although there's always a twist. This time, that twist leads to one more clue about Ishmael's forgotten past.

A little history. A little humor. An alien from outer space as the detective. What more would anyone want from a locked-room mystery? Simon R. Green's Death Shall Come provides all those satisfying elements, although it's a little violent. But, murder isn't pretty, and neither are Green's stories.

If I ever get the time, I need to try one of these, as I have liked most of the Green books I've read.

I like his fantasy books, especially the Blue Moon ones, but I haven't had the chance to try these yet.

I read, must be a dozen or so of Simon Green's books, but not for a while.

It's nice to know I'm not the only one out there who likes Simon R. Green's books! Yes, when you have time, you'll all have to try one of the Ishmael Jones ones.

This series sound interesting and fun. I just went to my library and placed a hold on The Dark Side of the Road. Thanks.

I'll be curious to see what you think, Gram. Violent. I warned you!