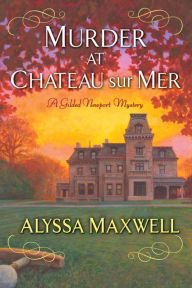 Don't make the same mistake I did. If Alyssa Maxwell's Murder at Chateau sur Mer sounds interesting to you, go back and start at the beginning of the series, not with the fifth book. I have an excuse. I was reading it for a review. But, you've been warned that it's best to start at the beginning and get to know the characters. It's not that you can't start with this one. It's fine, but I was so intrigued that I wish I didn't know what had happened in the previous books.

In the 1890s, Newport, Rhode Island was an enclave for the Four Hundred, the wealthy who dominated society. Emma Cross is a less-well-off cousin of the Vanderbilts. She has to work to keep Gull Manor, the house she inherited from her great aunt. She takes in "less fortunate sisters". Emma is a society reporter for the local newspaper. She's covering a polo match when she overhears snippets of conversation about U.S. Senator George Wetmore, conversation that sounds threatening. When a young woman tries to approach Mrs. Wetmore during the match, Emma's curiosity is aroused. And, when a police detective friend, Jesse Whyte, calls in the early morning, and asks Emma to go to the Wetmores' house, Chateau sur Mer, she's even more curious. That same young woman from the polo match has been found dead at the foot of the stairs at the Wetmores'.

Mrs. Wetmore asks Emma to investigate, but she never intended Emma to pry into her family life and secrets. But, Emma is even more interested in the life of the victim. When she finds the victim was a prostitute, she follows the clues into a brothel, knowing none of the men in her life would get answers there. It's just the first place Emma goes that scandalizes society, and results in changes to her own life. But, she's driven for a passion for the truth. Who killed the young woman? Who wanted to ruin Senator Wetmore?

Murder at Chateau sur Mer is a fascinating historical mystery with a cast filled with recognizable names. Emma herself is an attractive narrator who understands the gifts she's received because of her family connections, and the lack of support for the victim. It's a mystery of class and division, an intriguing story of the haves and have-nots during the Gilded Age.

Don't do as I did. Go back, and start with Murder at the Breakers if you like American historical mysteries.

This is a fascinating series. I have been enjoying each new book.

So good to hear, Libby!

Thank you for the recommendation to start with the first book. I have made this mistake with another series, and sometimes, it can make one not appreciate a book unless all previous books have been read.

You're welcome, Bonnie. From what I read in that most recent book, you'll enjoy it more as you watch relationships develop and change.