Who Thought This Was a Good Idea? by Alyssa Mastromonaco 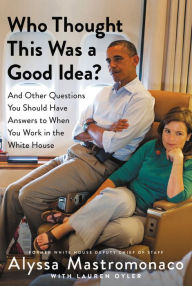 I'm the wrong demographic for Alyssa Mastromonaco's story of her time working for Barack Obama, in his Senate office, his political campaigns, and the White House. Who Thought This Was a Good Idea? is subtitled "And Other Questions You Should Have Answers to When You Won in the White House". I guess I thought a forty-year-old would write a thoughtful book, maybe with some humor since it does have that title and jacket cover. But, it's really meant for fifteen to twenty-five-year-old young women to demonstrate the political opportunities out there. And, the humor and comments about knocking back a drink before every big event is definitely for a younger demographic.

Mastromonaco was one of the youngest women ever to be a deputy chief of staff for the President of the United States. Her first two years of college showed her politics could be exciting. She graduated from the University of Wisconsin-Madison with a B.A. in political science. She was a press secretary for a congressman, then scheduler for Senator John Kerry's presidential campaign. When she was asked to work in Senator Barack Obama's office after Kerry's run was over, she was hopeful. "I really wanted to work for Obama. After the brutal Kerry defeat, I especially wanted to work for someone who was not going to run for president."

The book is about Mastromonaco's hectic life as first the director of scheduling, and then Deputy Chief of Staff for Operations. If at times, it seems overwhelming, it was. The author is quite honest about the lack of sleep, the busy schedule, the improper diet, one crisis after another. She's honest about her admiration for President Obama. And, she tells how she just wore out in the job, and needed to quit.

Alyssa Mastromonaco found she had to break ground for other women at times. Facilities in the White House were not exactly what one would expect. As I said, the book was not targeted to women my age. Even so, I found the behind-the-scenes glimpses fascinating as the author toiled in a vital job that only becomes visible to the public when something goes wrong. She succeeded beautifully, if not always easily, as she relates in Who Thought This Was a Good Idea?

Who Thought This Was a Good Idea? And Other Questions You Should Have Answers to When You Work in the White House by Alyssa Mastromonaco with Lauren Oyler. Twelve. 2017. ISBN 9781455588220 (hardcover), 248p.