Of Books and Bagpipes by Paige Shelton 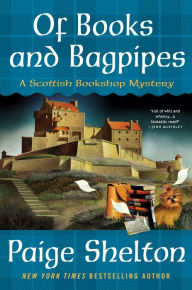 Who knew a bookstore owner could get in so much trouble? Delaney Nichols, an American now working at The Cracked Spine in Edinburgh, Scotland, rediscovers that her boss, Edwin MacAlister, has a mysterious past. Some of those secrets come to light in Paige Shelton's Of Books and Bagpipes.

Delaney thought she was just going to Castle Doune to pick up an "Oor Willie" comic book from a stranger. Instead, she found that man dead, with no sign as to how he died. She does find pages of the comic book, though, and hides them. When she returns to The Cracked Spine, other strangers show up, including the "dead" father of the man from the castle. And, everyone seems to think Edwin is behind the death, or knows more than he says.

This time, no one in The Cracked Spine seems cooperative. Everyone has reasons to keep secrets, especially Edwin. And, as Delaney discovers, those secrets go back a half a century or more. She teams up with her cab driver landlord, Elias, to dig into the past. She finds herself learning more about Scotland's history and past, as well as more about Edwin. Edwin's secret was shared by a number of people, and it was a secret that sheltered a killer.

Shelton makes use of a number of red herrings and ends the story with a big reveal. However, Of Books and Bagpipes tends to wander. Despite the wonderful, quirky characters (I'm half in love wth Elias), and the beautiful setting, this mystery seemed confusing. While I'm a fan of Shelton's books, this convoluted story, with a large cast and an elaborate exposition, isn't my favorite.

Wandering or not I loved the first book in the series and have just placed it on hold at my local library. I'm looking forward to wondering along with Delaney as she tries to solve the mystery.

And, I'm going to read the third one, Nora. I really like all of the characters.

I need a like button. LOL I've been wanting to read this one.

Oh, that's funny, Bonnie. I wish I had a like button!