My Cubs by Scott Simon 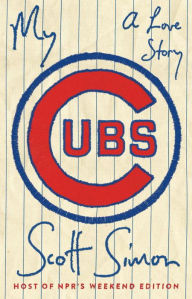 I'll admit I picked up Scott Simon's My Cubs: A Love Story because I enjoy Scott Simon as an NPR host. I've heard him speak before, and he's an excellent speaker who tells enjoyable stories. I like baseball, but I'm not one of those life-long Cubs fans. Simon, a Chicago resident, is. My Cubs is the story of his passion for the team, the people who love the Cubs, and even the history of the team.

Simon is proud of his allegiance. "I am a Cubs fan. A husband and father, an American, a Chicagoan, and a Cubs fan....But being a Cubs fan is my nature, my heritage, and probably somewhere in my chromosomes." He relates stories of growing up as a Cubs fan, attending games, listening to the sounds as he sat in classrooms. There's nostalgia and humor in all of his stories. There's humor even when you read the story of the Marine who survived Vietnam just to learn the Cubs blew it again in 1969.

Because Simon is a journalist and has a few connections with the Cubs, he's able to gather stories from everyone from that Santa Cubs fan to Tom Ricketts, one of the owners of the team. And, he tells of going to the White House with the team when President Obama welcomed them. He even rewrites poems to tell the story of the team and the players over the years.

"The Chicago Cubs - historically one of the most beloved, but easily the most cursed, hexed, and jinxed franchise in sports history." That's the team Scott Simon loves. He wasn't on the bandwagon. He shares intimate stories about his family, personal notes that show how important the team was to him, to his father, and, now, to his daughters. It's a charming, loving account, made even better by Gary Bullock's illustrations. If you love the Cubs, enjoy Scott Simon's stories, or appreciate sports storytelling, Scott Simon's My Cubs is a fan's enjoyable homage.

I have always enjoyed him on NPR. Soooo...I think I will see if my library has this book. Thanks for the review.

You're welcome, Gram. I could just hear his voice when I read it.