Have You Heard - Victoria Laurie's Ghouls Just Haunt to Have Fun

“Have You Heard?” is a column featured only on Lesa’s Book Critiques.  It features many reviews of audiobooks (fiction, with a concentration in mysteries) but these reviews will include recent and past books for an interesting mixture of titles. Content is usually written by Sandie Herron.  It also covers news of note and not generally available, such as ASAP publishing a limited edition for a certain author or perhaps something important out of Publisher’s Weekly.  The column is published sporadically, so you’ll want to watch for it! 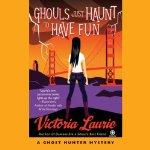 
MJ Holliday, psychic medium, and her partner Gilley Gillespie, technical wizard, have been called by Hollywood with the idea of a haunted Antiques Roadshow.  Gilley is totally excited about the idea, MJ says no way, and their business partner and former client, Dr. Stephen Sable is already packed.  The three go to San Francisco where the producer set up several mediums and several objects such as hairbrushes and small personal items.  The mediums were to determine if these everyday items could hold such power and whether that power was limited to positive energy.


When the trio lands in San Francisco, they discover they will stay at THE most haunted hotel in America, The Duke Hotel.  However, their cab can’t deliver them to the door because there is a crime scene blocking the entrance along with a crowd of people, police, EMTs, and construction workers renovating the hotel.  A woman’s body lies in the center of all that, and MJ has her attention.  Police allow MJ near the body to determine who she was and how she happened to end up on the pavement before she crosses over.  MJ accompanies the detective to the victim’s room where she spells out what happened.


The ghosts of the hotel show up for the shoot of MJ and three other psychics trying to determine if objects are haunted.  They make mischief that scares two of the psychics and reveals them to be fakes.  That leaves MJ and Heath Whitefeather, a young man raised on the reservation.  MJ and Heath realized that each other was the real deal, and the beginnings of a friendship formed.


When the hotel ghosts disrupt the shoot of haunted objects, the director sees a much more intriguing opportunity – dead people he can investigate via MJ and Heath.  A woman is killed in the rest room after MJ notices yet another woman in a large mirror walk into the ladies room and not exit.  MJ goes into the rest room where there is another huge mirror.  There are four of these huge mirrors that the owner of the hotel bought at auction in London.


Many more details are revealed as MJ and Heath investigate with Stephen and Gilley in his custom made sweatshirt full of magnets to keep the ghosts away. They find benign ghosts and then they find violent ones.  MJ begins to piece the clues together to determine just what happened to the entire hotel.


There are many voices in the book and differing accents, too, that narrator Eileen Stevens handles very well.  Each person sounds distinctly different.  Her overall narration is also done very well.  Nothing distracts from the story to bring the reader back to reality.  There are surprises, and I found my jaw dropping in places.  In others, I rooted for the characters and urged them on in the right direction.  It was almost as if I were a bystander in the story itself.

Please excuse me while I quick go grab book 4 in this terrific series, GHOULS GONE WILD.
Posted by Lesa at 4:00 AM

Thanks for running my reviews for a favorite paranormal mysttery series. I note that the paragraph about those huge mirrors seems a bit disjointed. They host a truly nasty spirit from the same London suburb as the woman who died in the very beginning of the book. This spook had the team running all around the already haunted hotel. It takes fancy footwork to chase him back into his portal. Very exciting stuff. Sandie