Encyclopedia of an Ordinary Life by Amy Krouse Rosenthal 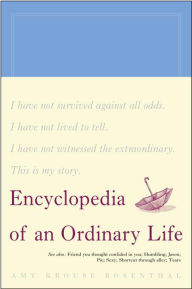 There was something poignant about reading Amy Krouse Rosenthal's memoir, Encyclopedia of an Ordinary Life. I checked it out of the library when I read her piece in The New York Times, "You May Want to Marry My Husband,"http://nyti.ms/2mFk0fE. Rosenthal wrote the essay when she knew she was dying of ovarian cancer. Ten days after the piece appeared, she died.

Because Rosenthal's memoir was published in 2004, before she started publishing her children's books, it doesn't discuss them. Instead, it's very honest about her family, her feelings, her friendships, but it doesn't sugarcoat her faults. It's a clever format that I haven't seen for a memoir. She begins with an almanac that puts her life and book in context, what was popular when she wrote it, everything from news stories to children's names. She follows that with writings that led to the memoir. Then, she dives into an alphabetic discussion of her life.

Rosenthal read the entry "Encyclopedia" in an encyclopedia. One of the pertinent quotes said, "constructed like an onion, the different layers enclosing the heart". Rosenthal took that to heart, revealing thoughts and emotions. Dreams, fears, her husband and how she met him. She talks about introducing one friend to another, and feeling left out. She talks about things she's been into, such as coloring, and puts them in chronological order. Because the entries are in alphabetical order, random topics seem to come up. But, they all combine to give us a glimpse into Rosenthal's life.

At times, Amy Krouse Rosenthal's thoughts are nothing out of the ordinary. And, then there are comments that touch the heart. Under "Rainbows" she says there should be some sort of ritual associated with rainbows. "Or see a rainbow, put a dollar in a jar; then when you leave home at eighteen, your mother sends you off with your rainbow money." Just think about that - "your rainbow money". I want rainbow money in my life.

Why is Rosenthal's memoir heartbreaking while other biographies are not? Those people lived as well. Perhaps it's because her death is so fresh. Perhaps it's because of that essay about her husband, and the love she knew she was leaving behind. Knowing what we know now, that Rosenthal died on March 13 at fifty-one, the final entry is heart-breaking. It's "You". She says perhaps you think I don't matter. "But I was here. And I did things." The final line of that entry is, "I was here, you see. I was." Yes, Amy Krouse Rosenthal was.

I think her piece about her husband and her illness, and her subsequent death, touched everyone. Way, way too young. Thanks for reviewing this book.

That bit about introducing friends who become friends and you feeling left out is straight from one of my favorite episodes of I LOVE LUCY!

Sounds like a very poignant book. I don't usually read memoirs, but I must confess that this one has me intrigued. The encyclopedia approach reminds me of scrapbooking. Some scrappers have a ritual of taking a week or a day in their lives each year and scrapbook the things that happen or are pertinent for that time period. It gives a snapshot into a person's life in a condensed version of the encyclopedia. It's got my own creative juices flowing. I guess I'll need to read this one.

I agree, Jeff. Way to you. I don't remember that episode of I LOVE LUCY. My favorite episode was from a little version of the show, when Lucy was working at a bank and found her till short at the end of the day.

Sandie, It's a totally different type of memoir. I hadn't heard about that in scrapbooking, but I don't pay much attention to it. Very interesting.

I read the Modern Love column and followed her story to its too-soon end. Guess I have to read this now. So sad.

Thank you for posting this. Very moving. I need to read more of her story.

Yes, it was a too soon end. That Modern Love column really touched so many of us.