Clea Simon is an author and cat lover. All of her mystery series have cats in them, as you can see at her web site www.cleasimon.com. But, today, she's going to talk about a classic that inspired her. I hope you check out her fascinating piece.

The spark (or A Cat’s-Eye View of Fire)

Fire, to an animal, is not a tool. While we humans may use it as a source of warmth or utility – a means to cook food or transform raw materials – to an animal it remains an untamed thing. A rival beast, insatiable and dangerous, and nearly impossible to defeat.

Luckily, fire can often be more readily detected by the four-footed than by the two. A cat’s sense of smell, for example, may more quickly pick up the acrid scent of burned wood or plastic, of ash as it dissipates in the air. A cat’s ears may hear its crackle before we would, and even if a cat’s prey-seeking vision may be more easily entranced by the creep of the red glow up a smoldering ember, a cat’s instincts will urge it to flee once that ember bursts into flame. 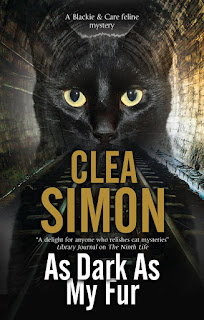 These are thoughts I was exploring the other day, as I worked on the final scenes of my current work in progress. Tentatively titled “Cross My Path,” this will be the third in my Blackie and Care series, featuring a homeless teen and the feral cat who has befriended her. (The series, published by Severn House, begins with “The Ninth Life” and continues with “As Dark As My Fur,” which will be published on April 1.)


The feline experience of fire is important to me because in these novels, set in an unnamed dystopian city with distinctly Victorian overtones, the narrative is provided by Blackie. And although he is a cat, with all a cat’s instincts and reflexes, he is – at least to the reader, if not his human companion Care – an articulate narrator, who strives to represent himself and his world both accurately and explicitly. A world that is both pre- and post-industrial, where fire is both necessary and, at times, more threatening than now.

As sometimes happens, as I worked on this late scene, I realized I had a wonderful opportunity for a precursor. This earlier scene would feature a more benign blaze, although of course it would foreshadow the later crisis. And as I started jotting down notes, I realized I was time-tripping back to an earlier scene in my own life – the long nights of my childhood, when with a flashlight under the covers, I would stay up way too late, reading and re-reading, utterly absorbed in Rudyard Kipling’s “The Jungle Book.” 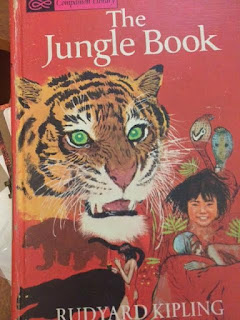 Now, I understand that Kipling is problematic. His racism may have been typical for the time, but it is now obvious. And “The Jungle Book,” published in 1894, is no exception, with its cultural colonialism and exoticization of India. But as a child in an often troubled home, I didn’t see the condescension or disrespect. I saw a child who got to run away and live with the animals. I saw escape into a wonderful world populated by wild, furry friends. When the “man child” Mowgli – spoiler alert – is sent back to the village, I cried. (Second spoiler alert: don’t worry, he goes back to his adoptive wolf pack.) 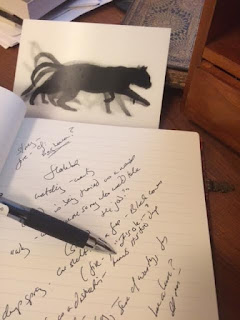 Until this realization, I hadn’t opened a volume in Kipling in years. (I still tend to stay up way too late reading, however.) But as I wrote out my notes, cataloguing the various sensory clues fire would give to a creature who relies on scent and sound more than sight, a name came to me: Bagheera. Blackie (“not my real name,” as he frequently notes) may be much smaller and less fierce, a feral version of the common domestic cat. But in spirit, he is a direct descendent of the ferocious – and ferociously loyal – black panther who befriends Mowgli.

And so I pulled out my childhood copy of “The Jungle Book” and found myself re-reading it once again. In particular, reliving the animals’ reaction to the “Red Flower,” as they call it. For it is his mastery of fire that ultimately distinguishes Mowgli as a human. And it occurred to me that, all these years later, the spark ignited by a children’s book has caught. I have achieved my early wish and now live among the animals, at least while I’m at work.


Clea Simon is the author of 22 mysteries in four series, the most recent of which is As Dark As My Fur (Severn House). She may be reached at www.cleasimon.com.

Thanks for having me, Lesa!

Clea, Thanks for the guest post. Don't expect comments, but do expect readers. (smile)

What a lovely tie-in to your new book Clea! Of course I'll be looking for AS DARK AS MY FUR on April 1st, which happens to be Lesa's birthday as well. Your post here is quite intriguing, and I hope I'll keep it in mind as I read the newest nook next year. Blackie and Care are also intriguing characters, and I look forward to their next mis-adventure.