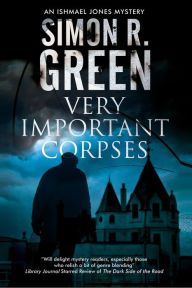 Ishmael Jones returns in Simon R. Green's third mystery in that series, Very Important Corpses. It's a locked room mystery in which most of the supporting characters die. But, that's what happens in those country house mysteries in which everyone is locked in together. The Organization sends in Ishmael, because they're in the business of "protecting Humanity from things that don't officially exist."

Ishmael and his partner, Penny, head to Scotland where the Loch Ness monster isn't the only one. Ishmael says there are "monsters and men who have monsters in them."  A secretive, powerful group of twelve, the Baphamet Group, is meeting there at Coronach House. There are rumors about both the Baphamet Group and Coronach House. But, Ishmael isn't concerned about rumors. He's there to investigate the murder of the last agent of the Organization, who was acting as security there. He's also there to protect the principals of the Baphamet Group. If they die, the economy of the world could be affected.

Imposters, infiltration by a reporter, and more death. Ishmael and Penny are caught up in a confusing case that leaves them guessing. And, it leaves Penny wondering about the man beside her. He's the one who says men have monsters in them. What would it take to bring out the monster in Ishmael Jones?

This book, like some of Green's other ones, becomes graphic in its violence. With the comment, it's not murder, it's butchery, Ishmael sums up the scene at Coronach House. And, the only person who could find his way to a solution is the one sent to the scene, Ishmael Jones. He doesn't quite succeed in protecting all the Very Important Corpses.

I just returned the second book in the series to the library. I like Ishmael Jones. Nice to know there's a third book. Thank, Lesa.

I like Ishmael as well, Karen. And, he seems a little more "human" with Penny as a partner.