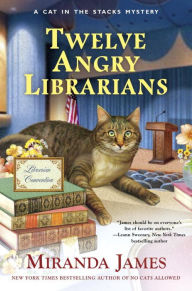 I'll admit I'm prejudiced because I am a librarian, but anyone who has attended a conference, or worked in a job where gossip swirls, will appreciate the conversations in Miranda James' latest Cat in the Stacks mystery, Twelve Angry Librarians. James easily entwines two facets of Charlie Harris' life, personal and professional, in this entertaining story. And, for all of us who love cats, of course there's Diesel, the Maine Coon cat with his own personality.

As interim director of the library at Athena College in Mississippi, Charlie is a reluctant participant in the Southern Academic Library Association's annual conference. Because the college is this year's host, he must make a welcoming speech and moderate a panel, two things he tries to avoid if at all possible. And, when he finds out that a former graduate school classmate is the keynote speaker, he's angry again, years later. Charlie hadn't seen Gavin Fong in years, and he's already causing problems for Charlie's co-worker, Lisa Krause, chair of local arrangements. The conference has barely started when Charlie has a public confrontation with him. Charlie is embarrassed, but it isn't long before he learns there are a number of other people with equal reasons to detest Gavin Fong. None of them are unhappy when Gavin drops dead just minutes after he gets up to speak.

Charlie admits he's nosy. He also knows he wants to be helpful. He just can't help himself. He asks questions of fellow librarians, and tries to piece together the answers to the mystery. Who killed Gavin Fong? The conference and his curiosity keep his mind off of other subjects. The university is searching for a new director and Charlie debates whether he should throw his hat in the ring. There are family issues that trouble him. If he can poke around in a murder investigation, he can forget about his personal life. However, Charlie Harris is always careful to call the lead investigator with helpful bits of information.

James' latest story is entertaining. Mystery fans should watch for recognizable names to pop up in the course of the convention. Diesel is still as engaging as ever, with his chirps and affectionate behavior. The solution to the mystery is clever, and appropriate. Twelve Angry Librarians should be a hit with so many readers; cat lovers, cozy mystery readers, and, of course, not-so-angry librarians.

Thanks for such a wonderful review, Lesa!

Really enjoyed this one, Miranda. It was a lot of fun. Thanks for writing an entertaining story!

I do, very much, enjoy Miranda James' books.

I would love the covers even more if each featured a Maine Coon cat. Love Diesel!

I have this one on my Goodreads want to read list. The library in our small town is the center for many, many activities for all ages.

I know, Reine. And, "Miranda" knows how I feel about that. I even put it in a couple reviews of the early books. That cat is NOT a Maine Coon cat.

It's fun, Gram. I booktalked it yesterday to a group of librarians.

Just ordered for my library. Looking forward to reading it.