The Mother's Promise by Sally Hepworth 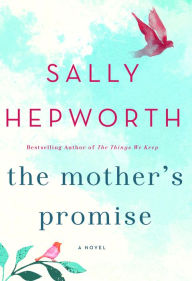 If you're a fan of the issue-oriented novels of Jodi Picoult or Lisa Genova, you might want to try Sally Hepworth's The Mother's Promise. I'll admit, it was a difficult book for me to get through. But, I'm a wimp who likes even my mysteries to end on a satisfying note. These three authors write realistic stories that don't always have happy endings.

Zoe Stanhope suffers from social anxiety disorder. From the time she went to kindergarten, she experiences panic. Her first slumber party was a disaster. And, whether or not they're actually looking at her, Zoe always feels as if people are staring at her. As a teenager, it's worse than ever. She reluctantly agrees to go on a double date with her best friend, only to crash at the last minute. It's her mother, Alice, who has always been there for her. As a single mom, Alice understands her daughter's fears and needs. She's Zoe's safety net. And, then Alice is diagnosed with stage 3 ovarian cancer. It's only then that Zoe's mother realizes there is no other safety net for Zoe.

Alice has to turn to two other women for help, but they are needy themselves. And, one of them causes a crisis in Zoe's world when she intervenes. It's a story that allows the three women, and Zoe, to face their fears, and deal with their problems. Without going into detail, these women have innumerable issues.

The Mother's Promise is an emotionally intense, heart wrenching story. It's a novel with a bittersweet ending, featuring women who have to step up with courage. I wouldn't have read the novel if I hadn't been reviewing it for a journal, and, I won't say I'm "happy" that I read it. But, The Mother's Promise fulfilled Hepworth's intention. Her story is about the strength of a mother's love, and what she'll do for her child.

*****
FTC Full Disclosure - I received the book to review it for a journal.

What was the most difficult part to getting through this book? Was it because it was so emotionally intense? I am now finding myself reluctant to read The Color of Our Sky because the character of Mukta is so incredibly sad. The chapters on her friend Tara who has a much better situation (higher caste in India) are easy to read but when I read about her contrasting friend, wow!

I think, Carol, that it was a mother knowing she was going to die, and asking others to step in and take her place. I just found it tough.

Thanks for sharing such a great blog Keep posting.
business directory
CRM software

aadhar card download by name and date of birth

If you are interested in then we can provide you thedatabase providers in mumbai and company directory
We also provide b2b company in india and data provider.