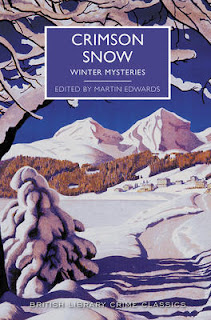 Over on The Poisoned Pen's blog, I've asked a small group of mystery authors to write about what they're reading "In the Bleak Midwinter". I just finished the perfect book for that theme, Crimson Snow: Winter Mysteries, edited by Martin Edwards. It's a collection of traditional crime short stories set in England by authors who were well-known in their time, such as Margery Allingham, Michael Gilbert, Julian Symons. I discovered stories I loved by authors I had not heard of, such as Victor Gunn and Christopher Bush. This collection reminds me why I love traditional mysteries.

Victor Gunn's story, "Death in December" was a lengthy piece featuring Chief Inspector Bill "Ironsides" Cromwell. It's a piece that was originally published in 1943. Ironsides accompanies a co-worker, Johnny Lister, to the family estate at Christmas. Is there anything better in a Christmas mystery than to have the detective snowed in, isolated with a cast of suspects? In this case, there's even a ghost story. Victor Gunn was just one pseudonym of Edwy Searles Brooks, according to Edwards, who introduces each piece with the background of the author, and a note about the story or the detective.

The author Christopher Bush was born on Christmas Day, and his name was actually Charlie Christmas Bush. His contribution, "Murder at Christmas", is narrated by his private detective, Ludovic Travers, who visits a policeman friend for the holidays. When a man is found murdered, Travers can't help himself. He does a little nosing around.

There are plenty of killers along with Santa Claus and carolers, thieves and con men. There's a great deal of pleasure in reading these older traditional stories. In one case, the reader even gets to match wits with the sleuth, just as readers did when the story was originally published.

Martin Edwards calls these "vintage" crime stories. One definition of vintage says, "of high quality or lasting value, or showing the best characteristics of the person who created it." Crimson Snow fits that definition. If you would like some of the best traditional stories, with a winter or Christmas setting, try Edwards' collection.

Excellent! I've read all of the collections Edwards has done in this series and I will surely read this one as soon as we get home and I get it from the library.

It's the first one I read, although someplace in all of my books, I have a Christmas collection by him. I'm looking forward to the next release in June, Jeffrey. It's locked room mysteries & I'm a big fan.