No Pity for the Dead by Nancy Herriman 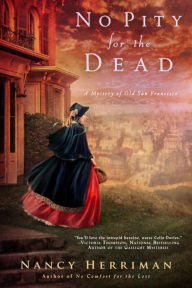 Nancy Herriman's No Comfort for the Lost was one of my favorite books last year. Now, she takes us back to San Francisco in 1867 in No Pity for the Dead. It's another atmospheric mystery that brings the city, its life and politics, to life.

Celia Davies knows she's a strong-willed, unyielding woman. Those qualities make her an excellent nurse, dedicated to the immigrants and poor women she serves at her Females' Free Clinic. She has lost some of her backing from the wealthy women of the city because of her support of the Chinese at a time of racial unrest. And, Celia's cousin, Barbara, who is half-Chinese, suffers from that same discrimination. Barbara's fortunate to have one dependable friend, Grace Hutchinson. And Celia has a friend in Grace's stepmother, Jane. So, of course Jane and Grace turn to Celia for help when Grace's father becomes a murder suspect.

Ironically, it's Celia and one of the neighborhood young men who find the victim. Owen Cassidy was supposed to be working on a construction project at Martin and Company, where Frank Hutchinson was a partner. Instead, a co-worker convinced the fourteen-year-old to dig for gold in the cellar. They found a body, not gold. And, when Owen brought Celia back to the cellar, they interrupted someone in the process of digging up the body. Police Detective Nicholas Greaves isn't at all happy to find Celia once again involved in his murder investigation. And, since he and Frank Hutchinson are long-time foes, he'll need convincing that Hutchinson wasn't involved.

Herriman's latest historical mystery is a complicated one with a large cast of characters. It's rich in detail of the history of San Francisco, with accounts of plans to flatten the hills in the city, and the mining and shady histories of many of the residents. The stories of the main characters, Celia Davies and Nicholas Greaves, stretch back to the Crimean and Civil Wars. It's not easy to wrap your mind around all the details and characters while reading this book. This is a dense, leisurely paced mystery.

Readers really should go back and read No Comfort for the Loss first. Meet Celia Davies and Nicholas Greaves, two people who are dedicated to get justice. They may not always see eye-to-eye, and they find their way to an answer by different routes, but they're strong characters. And, San Francisco in 1867 needed the type of strong-willed characters that stand up for the victims in No Pity for the Dead.

I like the idea of the setting - post-Civil War San Francisco - and if I wasn't already swarmed under with books I would get the first one. But I have several more (Colin Cotterill, Stewart O'Nan, P.J. Tracy) waiting at the library, along with the ones (Megan Abbott, Bill Crider, etc.) I have here already.

Whoever said "Too many books, too little time" knew what s/he was talking about.

That person sure did know what they were talking about, Jeff. I can empathize.