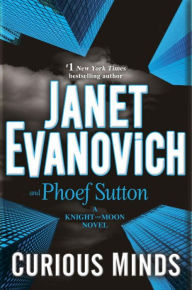 I'll admit I haven't read books in all of Janet Evanovich's series. But, it didn't come as a surprise when a car blew up in her latest book, Curious Minds. This time, though, she's moved into a higher price range. Evanovich and co-author Phoef Sutton blew up a Rolls-Royce Silver Shadow. Most of the rest of this fun caper was a surprise, though.

Riley Moon has degrees from Harvard Business and Harvard Law. She's representing the prestigious mega-bank Blane-Grunwald when she shows up at Mysterioso Manor, home of the uber-wealthy eccentric Emerson Knight. But, he only wanted to speak to Gunter Grunwald, and Riley had to admit the man was missing. Their drive back to the bank to confront Gunter's brother only convinces Riley that Emerson is nuts. Her boss asks her to work with Knight, expecting her to report back to him. Instead, Riley ends up in a chase across country, one involving gold, "Cammo dudes", and a senior citizen hot-wiring a car.

There's so much more to this enjoyable caper, though. Let's just say it's a story involving national security at the highest levels. However, it's the contrast and relationship between Emerson Knight and Riley Moon that makes the story successful. Riley's a little uptight, trying to make it in the financial world. But, at heart, she's still a Texas girl, daughter of the retired county sheriff, and the girl who could outshoot her four brothers. She's the perfect assistant for Emerson Knight. "physically a ten, but intellectually he was a certifiable fruit basket". Riley's opinion after she's known him a little longer? "His rigid confidence bordered on arrogance, and was flat-out annoying. It was tempered by an honest simplicity that was charming." Emerson turns out to be an adventurer with lots of money, who launches himself (and Riley) into danger with no more than a basic plan.

Looking for a caper with two attractive heroes, and a couple admirable sidekicks? Looking for greed on a grand scale? Check out Curious Minds by Janet Evanovich and Phoef Sutton.

This sounds like it'd be a good audiobook to take on vacation.

I quit reading Evanovich's main series about Stephanie Plum, which is going nowhere but around and around in the same old/same old, in 2009, but I do read her Fox & O'Hare books written with Lee Goldberg. I might give this one a try.

I'm with you, Jeff. I quit reading Stephanie Plum a long time ago too. And, to be honest, the early ones were the best before it became a one-trick pony. This one was fun.

Sandy, I think you're right. It probably would be a fun audiobook.