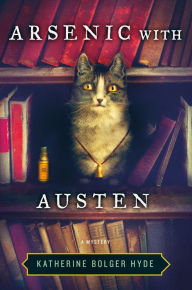 Katherine Bolger Hyde's debut mystery makes me regret that I don't know Austen better. Each chapter of Arsenic with Austen begins with a quote from one of the novels. If I was more knowledgeable, I'd probably have been more familiar with the direction the story took. I was impressed with some aspects, surprised by the ending, and not surprised by the culprits. I also have the feeling I missed some major points by only knowing a couple of Austen's books.

Emily Cavanaugh hadn't been back to Stony Beach, Oregon in thirty-five years. As a teenager she spent summers there, met and lost the love of her life. Now, at fifty-one, she's a widowed professor, and the heir to her great-aunt Beatrice's estate. In other words, Emily inherited the house called Windy Corner, $6 million in cash and assets, and most of the property in the small community. Her uncle's nephew, Brock, inherited a small portion of the estate. And, it seems, even at Beatrice's funeral that a quarter of the town was united behind the mayor and Brock in wanting Emily to sell out to developers.

But, Emily still loves Stony Beach, the town she saw as a refuge. She loves the library in Windy Corner. As she questions Beatrice's housekeeper and some of the shopkeepers, she starts to grow suspicious. Aunt Beatrice's death seems a little too fortunate and a few people seem a little too eager to get on Emily's good side. When Emily joins forces with Sheriff Luke Richards, the man she once loved, the two start poking at suspects who are a little too slick for comfort. And, one more death convinces Emily and Luke that Beatrice was somehow murdered.

It's refreshing to have an amateur sleuth in her fifties instead of a young woman. Emily is a mature woman with a history, and a kind heart. That kind heart leads to a couple surprises in the book, including the ending. It is surprising that she's an English professor who is a Luddite, unfamiliar with computers or Netflix. Most cozy mysteries have victims that are not well-liked, and the amateur sleuth has a host of suspects to sift through. The victims in this book are likable characters, and the reader regrets their deaths as much as the sleuth does. It makes sense that Emily would want to find the killer.

If you're looking for a mature sleuth with an adult relationship with an old boyfriend, a kind and not eccentric character, try Arsenic with Austen. And, if you are a lover of Jane Austen's writing, tell me what I missed.