Television's Female Spies and Crimefighters by Karen A. Romanko 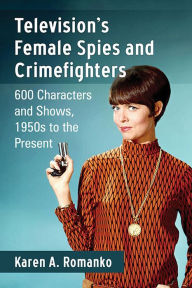 I love a good reference book that deals with the field of crime fiction. Former librarian (Her bio says that. I think once a librarian, always a librarian.) Karen A. Romanko's book covers 600 Characters and shows from the 1950s through August 2014.Television's Female Spies and Crimefighters is a fascinating book that will remind readers of shows they enjoyed, characters they liked, and introduce them to a number of shows they may never have seen. Best of all, it's an excellent reference book.

The book "covers television series which feature female spies, private investigators, amateur sleuths, police detectives, federal agents and crime-fighting superheroes as lead or noteworthy characters". The women discussed did not always have the lead, but they had vital roles in the shows. The author indexes the book by series title and by the character's name. A reader can search for "Fletcher, Jessica", and that entry will be cross-indexed to Murder, She Wrote. There's also an appendix that lists  what the author considers the most rewatchable series available on DVD.

Romanko's book is an excellent summary of the history of females in crime shows on television in the U.S. This comprehensive book covers 350 female roles in more than 250 television series. It's an excellent reference book. But, it's also nostalgic for those of us who remember many of those shows, but don't think of them often. I'm showing my age when I say I remember Peggy Lipton as Julie in The Mod Squad. Of course I remember Peggy in Mannix. The book also discusses the groundbreaking Cagney & Lacey. I was a little too young for Honey West. But, Rizzoli & Isles and Emma Peel are there.

I totally agree with your comment about "always a librarian". It's definitely in our blood and librarians we'll always be, regardless of circumstances or the presence of a paycheck!

Thanks for the review! Yes, I'm still a librarian in my soul, which is a sort of duplex, also offering a home to my writer half. ;-)

Can't wait to read this one. Purchasing today! Thanks Lesa.

A trip down memory lane! Just a quick look at a sample and I bought it. Thanks, Lesa.