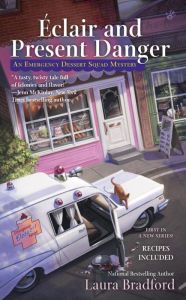 I've been talking about Laura Bradford's new mystery, Eclair and Present Danger, and her new series so long that it feels as if I've already reviewed the book. The author of the Amish mysteries launches the Emergency Dessert Squad series with a fun book filled with a cast of delightful characters. And, of course, there's a recipe or three.

Winnie Johnson was hoping to inherit money to keep her bakery open when she learned she was in her friend Gertrude's will. Instead, she is stunned to learn she inherited a vintage ambulance and Lovey, a tabby cat that doesn't seem to love Winnie. So, she has to close her bakery because her landlord is raising the rent, dreaming that Silver Lake, Ohio's downtown will become a hotspot. Instead, it becomes a spot for murder. And, Winnie's the one who finds the victim when she takes a peach pie over to a neighbor, and finds him dead with a pillow over his face.

Although Bart's death gives her the idea for a scheme to keep her bakery dreams alive, delivering desserts to needy customers via her ambulance, it's also a death that troubles Winnie and her friends. All of her older neighbors fear for their lives after Bart's death, and Winnie knows they're worried and can't sleep. While she and her friend and assistant, Renee, bake and dream up names for her new menu items, Winnie also mulls over ideas. Who does she know who might have killed her beloved neighbor?

Warning. Don't drool while reading this book. Winnie's desserts, and even the names of them, are enticing. But, so are the characters. Winnie truly cares for her friends, and her neighbors are a tight-knit group of older people who love her, and want to see her happy in her business and her love life. While I enjoyed all the talk about desserts, it was also refreshing to read a mystery with a lead character who knows her own mind, and decides which man she finds appealing. There may be a problem there, but Winnie and one man truly are attracted to each other.

I would have preferred that Winnie wasn't as confident as she is, though. She tends to be a little scattershot in her ideas as to the killer, and is a little rash when confronting suspects. Fortunately, this time, the amateur sleuth's friends are on their toes.

Great friends, a cat, wonderful desserts. What more does an amateur sleuth need? Laura Bradford's Eclair and Present Danger is a delectable start to a new series.

You're welcome, Laura! Can't wait to meet you Tuesday evening!

I'm adding it to my "to be read" list. Thanks for sharing your review!