Murder at the 42nd Street Library by Con Lehane 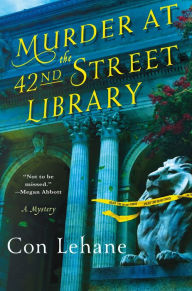 Con Lehane's intricately plotted mystery, Murder at the 42nd Street Library, is filled with complex, dysfunctional characters with twisted lives. At the same time, it's a love letter to New York City, an atmospheric story that begins and ends with tragedy at the building we all think of as THE New York Public Library, the Main Branch of the system.

Dr. James Donnelly was shot and killed right in front of the director of the Special Collections Division of the New York Public Library, but, for some reason Harry Larkin never admitted to seeing the killer. However, Raymond Ambler, curator of the crime fiction collection, had a "proclivity to take on quixotic battles for truth and justice that no one else cared about". When he learned Donnelly's interests were entwined with an author researching the newly acquired Nelson Yates collection of papers, Raymond became interested. In fact, he tried to follow up by talking with Yates, a crime writer who hadn't wanted the collection donated to the library. By the time Ray and his colleague, Adele Morgan, talked to Yates, it was too late. The author suffered from dementia, and couldn't always concentrate. Of Donnelly's death, Yates said the chickens are coming home to roost. But, that was before Yates himself was killed.

Ray's friend Adele seems to have the same inclinations he does. As she becomes interested in the large cast of characters surrounding Nelson Yates, she's drawn to a young shoeshine boy. Her interest in the boy leads her into surprising, sometimes frightening, situations. And, it isn't long before Ray and his bartender friend, Brian McNulty, are as caught up in Adele's search for answers as she is.

In fact, in this story, the good guys, Ray, Adele, McNulty, and Ray's cop friend, NYPD homicide detective Mike Cosgrove, are sometimes just as tormented and troubled as the bad guys. Sometimes, as they struggle to find answers, their misguided bumbling leads to worse problems.

Research and listening. In this book, Lehane brings together characters from two different series. Brian McNulty is his bartender from an earlier series, a man who listens, and knows you shouldn't dig too far into people's pasts. In the new series, it's Cosgrove's job to do that, while Ambler also wants answers.

The author answers one question. What does an amateur sleuth get out of snooping? Ambler isn't really interested in whodunnit. "What interested him was why; the level of desperation that makes someone murder and the missteps and misfortunes that make someone else a killer's victim, the twists and turns of life's paths that bring them together."

Twists and turns. Complex characters with twisted histories. Together Ray and Adele uncover shattered lives and lies that are sadly mirrored in present lives. Con Lehane launches a new series with Murder at the 42nd Street Library, as he cleverly starts and ends the tragic story in a place filled with stories and secrets, a library.

*****
FTC Full Disclosure - Although I am acknowledged in this book, in my professional capacity, I received this book from the publisher, with no promises or expectations for a good review.

I especially enjoyed reading this review. Complex plots and libraries are definitely my thing, and I'm going to look forward to reading this!